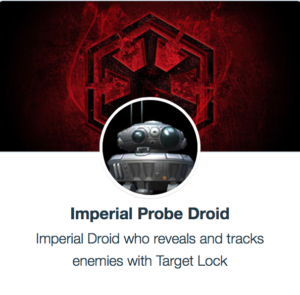 Main Mods Focus: Speed is pretty much always the biggest focus in Star Wars Galaxy of Heroes, however the Imperial Probe Droid gains Turn Meter at the end of each Droid or Empire ally’s turn or at the end of each Rebel enemy’s turn. Thus, Speed is important but not the main focus making Potency the main stat to work on. Landing the Expose from his basic and the Target Lock on the Detect special are the keys to success for IPD, so be sure to get a cross/plus with +24% Potency and solid Potency from the secondary stats of your other mods as well. The Target Lock debuff is especially important when you place a Zeta on IPD’s Imperial Logistics given Target Locked enemies cannot gain buffs.

Additional Areas to Focus: Speed, Health, Offense, Critical Chance and Critical Damage. While it depends on how you plan to use the Imperial Probe Droid, the Emperor Palpatine Let The Hate Flow special to drain 5% Health from the Imperial Probe Droid then allow it to Self-Destruct can prove effective in certain situations. In this scenario, Offense, CC and CD can help the AoE attack of the Self-Destruct hit the other enemies harder. Whether you like this tactic or not, Health is an area of emphasis with the Imperial Probe Droid which checks off the survivability box. IPD also has +50% Health from its Imperial Logistics unique, so adding more Health is icing on the cake.

I recommend the use of a two Potency sets (4 Potency mods) and a Health set (2 Health mods). A speed-focused arrow and potency-focused cross/plus would both be recommended. Note that under an Emperor Palpatine lead all Empire allies gain 32% Potency, so you can adjust your mods according to how you plan to use the Imperial Probe Droid in combat. Here are my recommendations for the Best Mods for the Imperial Probe Droid in SWGoH:

For ljcool110, not sure if you’ll see this but taking a shot. Would like to know what you think about modding a crew member differently if that is their only duty. For example, SRP, K2, Res pilot and JC and a few other only duty is as crew, would it benefit to mod them in a way to get better boost to crew power? Interested in your thoughts