Our SWGoH Should I Buy series continues with a review of the Endurance Starter Bundle, the Home One Power Up Bundle, and the Executrix Power Up Bundle.

When players first reach Level 60, the Ships function of the game opens and offers a whole set of options for starring and gearing. The game also offers some bundles focused on the capital ships to help players get a head start on Ships, but these bundles are only available for about 2 weeks after the first time Ships are unlocked, so it’s important to make a decision quickly on whether or not to take advantage of them. We’re going to dive into value of these bundles. 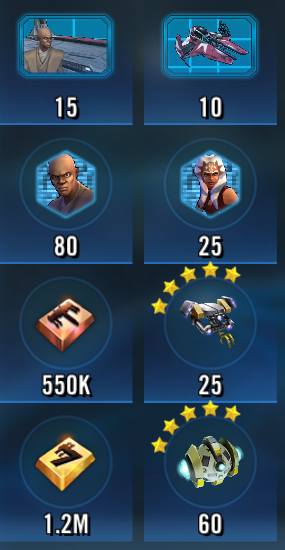 The Endurance Start Bundle is $19.99 USD and offers the following:

Of the three capital ship bundles offered, the Endurance bundle is priced a good deal lower than the others. The bundle offers the equivalence of two full characters and enough shards to unlock and star their respective ships. That said, by the time players reach Level 60 and can begin playing Ships, they will already unlock Mace Windu and his Endurance capital ship at 2*. Ahsoka is also often unlocked by many players through the pulling free Bronzium cards.

All this notwithstanding, everything that is provided in the bundle can be acquired relatively easy for free through just playing the game daily. The additional character shards can be useful in making Mace or Ahsoka a bit stronger, but as neither character is fully utilized as players reach end-game, there is a minimal need to put a lot of effort into them as early in the game as the bundle is offered.

Home One Power Up Bundle

The Home One Power Up Bundle is $49.99 USD and offers the following: 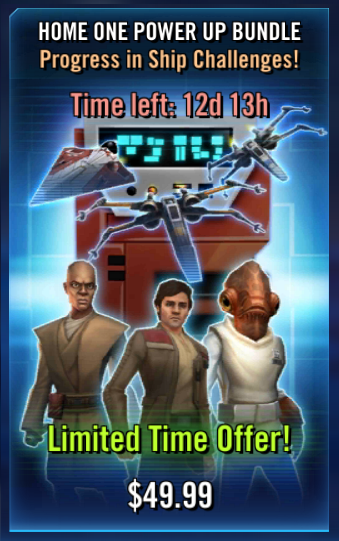 The Home One bundle is designed to provide a boost in the ability to do the Ship Building Materials challenge as well as providing a greater amount of Light Side ships to run with the Home One capital ship. The shards provided for Ackbar, Mace, and the respective ships for Jedi Consular, Clone Sergeant, and Resistance Pilot are not enough to take those ships much higher than stars given by the time players reach Level 60.

That said, if players haven’t already unlock Ahsoka, the Home One bundle will unlock both Ahsoka and her ship, and while Ahsoka isn’t used in end-game, having her ship early on can provide a boost to overall Ships performance. Additionally, the bundle provides enough shards to unlock Poe and his ship. While Poe’s ship is relatively unremarkable, the ability to get a head start on Poe for a Resistance team is invaluable. Unlocking Poe’s ship also provides another Light Side ship that can be used for challenges and unlocking Ackbar’s Home One at higher stars.

One of the best parts of the Home One Power Up Bundle is the gear provided specifically for Ackbar. The biggest factor of ship performance surrounds gear and taking Ackbar straight to Gear 5 without farming the individual pieces can help players make the greatest use out of the Home One capital ship right from the start. The credits and the ship building materials are always useful across the game.

While many of the options provided by the pack can be attained for free through generally playing the game, the addition of two full characters along with their respective ships, not to mention the added gear, the Home One Power Up Bundle can give players who intend to use the Home One capital ship an early edge within Fleet Arena.

The Executrix Power Up Bundle is $49.99 USD and offers the following: 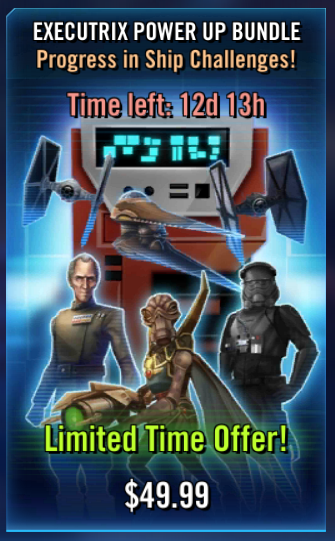 As described in SWGoH 101’s Which Characters First, one of the primary focuses of Ships is gaining zeta ability mats and Tarkin’s Executrix and Dark Side ships are key.

While playing through the game normally will unlock TFP’s, Geo Soldier’s, and FOTP’s ships at 1* a piece, the Executrix bundle provides enough shards to take these three ships up to a second star, which saves some farming time. The additional FOTP character shards will take him to 2* as well, which boosts the ship’s overall power.

As the zeta met challenge requires a 5* Executrix and five other 5* Dark Side ships, gaining additional stars for these ships all aids in the ultimate goal for Ships. The best part of the bundle, however, is through Sun Fac. While Sun Fac is no longer utilized in high levels of the Arena, Sun Fac is still an excellent tank and the Executrix bundles provides enough shards to unlock both Sun Fac at 3* and his great ship at 2*.

Overall the bundle puts a player well on the path towards getting the Dark Side ships needed to do the zeta mat challenge. The bundle also gives a boost towards Tarkin’s gear and thus his Executrix capital, which is one of the best capital ships to use, outside of Thrawn’s Chimaera capital ship. The additional shards provided as well as the additional character and ship makes the Executrix bundle one of the better capital ship bundles and can serve players well into end-game.

All three bundles can provide players with a large boost in Ships, but the “mileage may vary” with each one. The Endurance bundle is cheapest, but offers the least overall benefit. The Home One bundle provides the biggest boost across what players already have, and with the added gear for Ackbar, the Home One will be stronger, but Home One is a mid-grade capital ship outside of its requirement to unlock Thrawn’s Chimaera. The Executrix bundle is pricy, but the bundle helps players along and will give one of the best boosts in both Fleet Arena and also towards the zeta mat challenge.

Of course, there’s nothing that stops players from getting a huge advantage in Ships by purchasing all three bundles. What’s important to remember is that these bundles are only available for two weeks after Level 60 when the Ships section is unlocked, so be prepared to make a decision on whether to gain these great advantages as soon as you can.