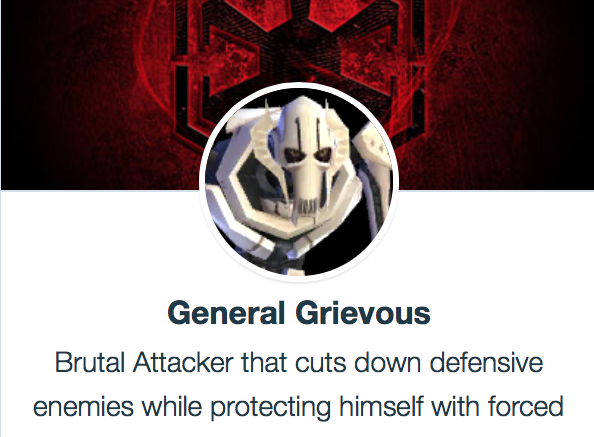 Welcome to the General Grievous mods guide, the latest article in our series about the popular game Star Wars Galaxy of Heroes where we take a look at the best mods for each SWGoH character. While we do not claim to have all of the answers in this game, the staff of Gaming-fans.com does their research and has used every toon we write about extensively. These are mod recommendations based on the character’s kit and actual gameplay to help you in your quest to dominate the Galaxy of Heroes holotables. 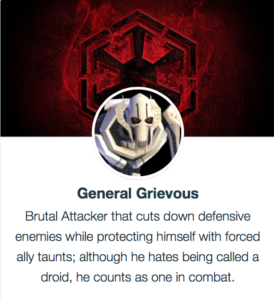 The Separtist general well known for his antagonistic role in Episode’s II and III of the prequel trilogy and The Clone Wars, General Grevious used to be on of the hardest character to unlock in Galaxy of Heroes. While General Grevious did not start off as a bad character, he was outclassed steadily over the years due to the many changes made to the game since its release. Now with the February 2019 rework of Grievous, B2 Super Battle Droid and MagnaGuard, as well as the additions of the B1 Battle Droid and Droideka, General Grievous is relevant in SWGoH.

Main Focus: Health. The addition of Gear 12 took this once squishy character and gave him one of the highest level of Max Health in SWGoH, and the changes to his kit are designed to feed off of this high Health number. On his basic it now states “Grievous’ attacks deal damage based on his Max Health instead of his Physical damage.” As a result ignore Offense and go straight for the highest Health numbers you can muster.

Additional Areas to Focus: When this was originally written in April 2018, Speed, Potency and Offense were all areas of focus for General Grievous. While the changes to his Physical Damage make Offense boosts now obsolete, Speed and Potency remains major areas of focus. Potency is key to all of the Separatist Droids given their reliance on the Target Lock debut to gain Turn Meter, survivability and more. In fact, all three of General Grievous’ attacks rely on Potency to make the debuffs stick, so aim for 80% or higher Potency (ideally 100%+). Speed also needs to be a major focus to make Grievous relevant go gather all of the secondary stat Speed boosts you can. One area where things may differ from the norm with General Grievous is the arrow mod where a Health primary with a high Speed secondary should be in play. If you have a mod like this with +10 or more Speed be sure to test it out. CC and CD are also areas to focus on given Grievous still has critical hits, they are just based off of his Max Health stat for the damage done.

In-game Mod Recommendations: Critical Damage & Health. These recommendations have been in place since the addition of Mods 2.0. While not necessarily incorrect or bad, these “advanced mod tips” are a bit unproven after the rework and I suggest a Potency set over a 4-mod CD set, but the Critical Damage focus on the triangle is a logical choice.