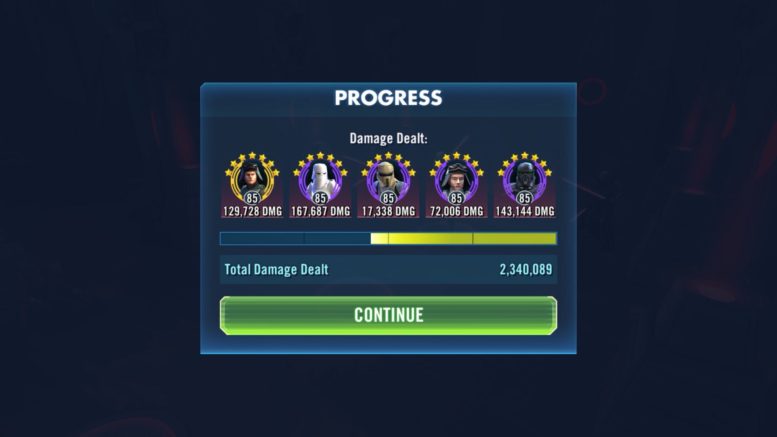 When Colonel Starck first arrived in SWGoH, I think most will forgive you for not having a clue who he was in the movies, but you certainly will know who he is in the game. 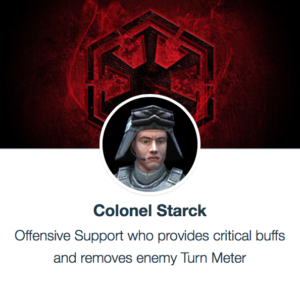 Starck has quickly found use in Palpatine builds and made the Imperial Troopers a force to be reckoned with… but how much does his Zeta come into play?

Starck’s unique Imperial Intelligence is his only available Zeta currently. It adds 3% Protection recovery to his current 7% Health recovery at the end of his turn. It also removes 1% Turn Meter from all enemies for each Empire ally currently alive on his team. This is doubled if you’re using Imperial Troopers. On paper this looks great but how much use is it in the games competitive modes? We’ll take a look now…

The in-game description for Colonel Starck’s final Zeta ability reads “At the end of his turn, Starck recovers 7% Health and 3% Protection, and removes 1% Turn Meter from all enemies for each active Empire ally (doubled for Imperial Trooper allies). While Starck is active, Imperial Trooper allies have +50 Armor Penetration.”

Squad Arena: Starck’s Zeta really doesn’t come into play much in Arena at all. Imperial Troopers are not viable on defence and the Zeta isn’t required to beat the Nightsister teams that Imperial Troopers are most commonly called in for. In fact with the Palpatine rework, Imperial Troopers aren’t even needed for that job anymore, period. Plugging Starck into a Palpatine build with the likes of Sion, Vader etc. can actually work. With the critical buffs, AoE Stagger and extra TM reduction, Starck can be somewhat useful but hasn’t really cemented his place in the traditional builds.

Rancor: With so many better options than Starck, using a Zeta for this purpose would be an incredible waste for the Rancor Raid.

AAT/HAAT: I have seen Starck used in P3 Imperial Trooper teams with some reasonable success, but much like Rancor it would be such a waste to use a Zeta for. There are already many established teams that do considerably larger damage than anything Starck fits in.

Sith Triumvirate Raid: The Sith Triumvirate Raid is still in its early stages of theory crafting, but so far Starck’s Zeta hasn’t come into play. With some phases ignoring protection and Sion being immune to TM reduction, the actual Zeta aspect for Starck’s unique is the least important part of his kit. Starck can be used to good success in P2 with the basic attack barrage of the Imperial Troopers can score impressive damage against Sion, but this has nothing to do with his Zeta whatsoever.

Territory Battles: Territory Battles: Imperial Retaliation is probably your best use for the Zeta. Longer battles with multiple waves are going to see the most use out of the TM manipulation and health/protection regeneration. Imperial Troopers are all but required through, with certain Combat Missions requiring Veers and Snowtrooper. The sheer speed of the Rebels we face here is the one time I’ve noticed the Zeta having some decent effect on the battle. As for the Special Mission to acquire Imperial Probe Droid shards, I have faced it both with and without the Colonel Starck Zeta with equal power/mods and found it really hasn’t played any role in victory or defeat, it usually comes down to RNG on dodges, foresight and counters when you’re not powerful enough to steam roll the mission.

Territory Wars: Imperial Troopers are an offensive squad and Territory Wars is essentially a large collective PvP Arena mode. As Starck has little use in Arena outside of a Palpatine squad or cutting down an underpowered or vulnerable team under General Veers, his Zeta also has little use here either.

How I Use zStarck: I have him Zeta’d and did so immediately once he was unlocked as I intended to max out the Trooper squad. However this one ranks up high with Sidious as one of my most regretted Zetas used. Starck sees action in the Sith Raid P2, Territory Battles, Territory Wars on Offense and the Imperial Probe Droid Special Mission, but outside of the Combat Missions the Zeta isn’t really doing anything at all. It didn’t make the IPD mission any easier and I didn’t improve Sith Raid scores… it’s just kind of there.

My Rating of Zeta Colonel Starck: As a member of the Imperial Troopers he is fantastic, but all of this performance and use comes from his AoE Stagger and Crit Up buffs. His Zeta plays little use as its only helping him stay alive and he isn’t exactly Commander Luke Skywalker in terms of damage output. He rarely gets enough turns in any difficult battle to make use of his TM reduction and the Zeta doesn’t really help the IPD mission which is why most people panic used it… myself included. I’m forced to give this Zeta a 2/10, although Starck himself is very worth using.

By DBofficial125
Thanks for reading! If you enjoy my reviews please be sure to check me out on SWGOH live on Twitch and Youtube