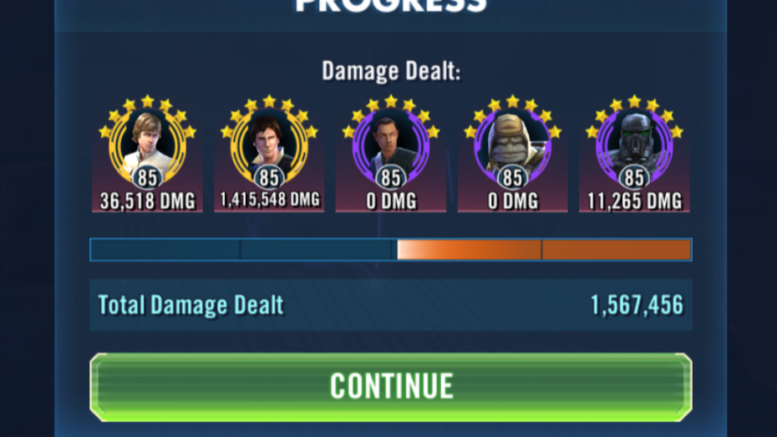 The Chex Mix team continues to grow in popularity in Star Wars Galaxy of Heroes as a go-to team for most guilds already fighting the Heroic STR. In fact, in our Sith Triumvirate Raid guide here at Gaming-fans.com, we list it as one of the top  teams in the entire raid based on the community’s response and our own experience. Here are the details of this team as well as a link to SWGoH GameChanger Nukin’s video on the team and strategy for reference.

This is a very easy team to run once you have put all the work into setup. Han will need a Zeta for this to be ideal. This battle will last just a few minutes, and will get you over 5% damage which equates to 1.5mil damage or so. The idea is that when the sabers hit Han, he gets retribution on Traya because of CLS lead and the death mark on Traya. It will last for about a minute. After stand alone is done, Han will kill the sabers and everyone can get a few hits on Traya. When Traya revives again, DO NOT go for 2nd topple. Just get a few more hits on Traya before your team fizzles out

For Chex mix to work, this is going to be the Key. You will need to utilize swgoh.gg for this. Have all your mods assigned to toons so you can see them on the site. When filtering on swgoh.gg, use the offense and speed secondary filters. You want mods with High Offense stats – +100 secondary offense etc. All toons will need offense cross and should be at 2.5-3k offense or higher. The speeds need to be in this exact order from fastest to slowest – CLS, Chirrut, Pao (or high offense attacker), Death Trooper, and then Han. *** At the very least, Han needs to be slower than Traya (180 speed) so she will isolate someone before you use stand alone (ideally you want DT and Han both slower than traya and under 180 speed.) Otherwise she will isolate Han when he uses Stand alone, and it doesn’t work.

Han – CD and CC set. CD triangle, Offense cross, Offense arrow. ** try to get his CC up as well with secondaries. He doesn’t want any speed at all.

CLS, Chirrut, Pao, and DT – They can all have offense sets. They all need Offense Cross and Offense Triangle.

***If you can put offense arrow on CLS, Chirrut, and Pao while still managing the correct speed, great. 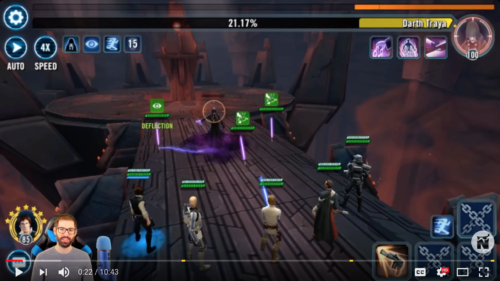 CLS is 1st toon to go according to speed (Han always goes first because of zeta.) He will also target the same saber that Han targeted. CLS needs to take out this saber if it’s not already dead.

Chirrut goes 2nd. His job is to get tenacity up on team. If Han has any debuffs, he won’t get tenacity up, but will instead get heal over time. If this happens, back out and start again.

Pao goes 3rd. His job is offense up.

Now Traya goes because she is at 180 speed.

Death goes 4th on our team, and inflicts death mark on Traya.

Now Han. This is where magic happens. Use “standalone” immediately. Then use his special “Never tell me the odds.” Then just go crazy on Traya. Only use basic because you get more damage from double tap.

You’re shooting for 3-5% which, when you do the math, could mean your Guild can defeat Phase 3 in about 20 attacks. Good luck!

By Diego G, Officer, Descendants of the Empire

10 Comments on "SWGoH: A Closer Look at the Chex Mix team for Phase 3 of the Sith Triumvirate Raid"