With the pending update to ships, there is a chance the following information will become out of date. However, due to the way ships work, I doubt this will be the case. In the unlikely event that it does change, this article will be updated as soon as any changes are understood. 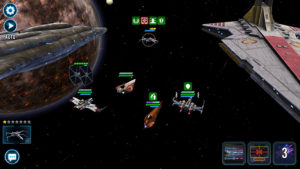 As with characters, stats are one of the most important parts of winning fleet battles. Unlike characters, ship stats can’t be directly influenced. We can’t choose to add more speed or health, or anything else. What we can do, is increase the crew rating of the pilots, which will increase multiple stats simultaneously by a predetermined amount.

The first and most important thing is that crew rating works the same way as Galactic Power – it’s entirely a numbers game. The stats on your mods don’t matter, which peice of gear you equip doesn’t matter. Every upgrade has a set value. All pieces of gear at a certain gear level will give your ship the same power, regardles of how hard it is to get, what stats it gives, or anything else.

It’s actually very similar to Galactic Power. The only differences are when Zeta abilities are involved, and if the ship belonging to the crew member is under 7*.

The Impact of Mods on Ship Stats

Mods, despite being the most complicated part of ship rating calculations, are relatively straight forward. The level and stars of each equipped mod are used to determine the power increase. Again, the stats don’t matter.

The above table shows the rating gained from equipping a single mod at a selection of star and level combinations.

As you can see, even at lower levels, 5* mods will give the biggest boost. Since stats don’t matter, pilots are a great way to use mods that are not high on speed or mods you leveled before you knew better. Like I said, it’s a numbers game, all you can do is take the biggest rating boost possible.

The Impact of Gear on Ship Stats

The power gained from equipping a piece of gear depends entirely on the current gear level. The same piece of gear is worth more to a G8 pilot than to a G7 pilot, so it’s easy to prioritize which pilot a piece goes to.

The table above shows what an individual piece adds at each gear level, as well as the power gained from all equipped gear when you reach each gear level. If you’re in between gear levels, just add the rating of each equipped piece with the total gained from the last completed gear level to find the total rating contributed by gear.

As you can see, there is a sharp increase as you continue to gear your pilots. Because of this, it’s worth gearing one toon at a time wherever possible if you’re looking for the biggest boost possible.

The Impact of Ability Levels on Ship Stats

Ability levels are straight forward. Every ability you upgrade, including leader abilities you wouldn’t use otherwise, will increase your crew rating.

The above table shows the total power gained for each ability at a specific level. As with the other factors involved, the amount you gain grows as your ability levels get higher. One oddity however, is that Omega and Zeta abilities are both level 8, so they are treated the same way, despite being two very different ability levels.

The Impact of Character Level and Rarity on Ship Stats

Level and rarity are part of the natural progression of each character, so there’s not a lot to talk about here.

Rarity is definitely a big boost, and something you should actively try to upgrade. Level on the other hand, is a much smaller rating increase, but necessary for mods, ability levels, and gear levels.

The final thing needed to calculate crew rating is the ship’s star multiplier. Each star your ship has increases this multiplier, which affects all rating increases from other sources.

So, as you increase your crew rating, the ship’s rarity will become much more important. That 720 rating from having 6 mods at 5* and level 15 will actually be 1080 if your ship is 7* – a noticable increase. This is on top of the normal stat boost for increasing rarity, making it extremely beneficial to upgrade your stars.

Ship power is calculated using the old power power calculation, from before Galactic Power was added. Each stat is worth a different amount of power, with the total being the power value shown. Crew power is the difference between the full power value, and the value with the new member removed. Because this is determined by crew rating, and doesn’t influence anything else, it’s not important outside of checking how much difference a crew member makes.

Now you know how to calculate your crew rating, it’s time to look at how it’s used. Each ship has hidden “crew stat contribution” multipliers, which are used to calculate the stat increases. To find these multipliers, you can either check on swgoh.gg or you can reverse the calculation to find it yourself, but rounding will reduce the accuracy. The final calculation is;

As you can see, crew rating is very similar to galactic power, and in some circumstances, you can just use the character’s power. Ultimately, any upgrade to a crew member will increase the ship’s stats, but some ways are more efficient than others.

As stated at the start, this information could become outdated when the upcoming rework to ships happens, but it’s more likely that only the stat contribution multipliers will be changed.

This is fantastic stuff! Is there a tool which provides the actual stats at each piece of gear (somewhat like the ship speed calculator)? For example, I’d love to know the stat difference between Sun Fac at G12 vs each piece of additional G12 added. Then I can do a cost/benefit analysis…

Not that I know of, but it’s something you can calculate – the formula is given near the end of this article.