The month of May is coming to a close and the Memorial Day weekend premier of Solo: A Star Wars Story kicked off tonight. While Star Wars Galaxy of Heroes was busy with a major game update in the past few days and will feature double drops in the days to come, it is time to look ahead to the month of June and see who the daily login character in SWGoH will be.

To start that look ahead SWGoH GameChanger Gaming-fans.com is pleased to make the exclusive announcement of the June daily login character in SWGoH – Lando Calrissian. 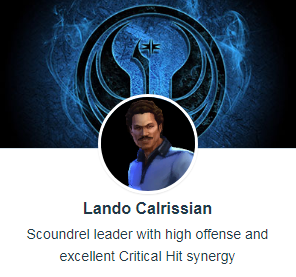 Best known for his roles in Episodes V and VI, it is no secret that the young Lando is one of the stars of the latest Star Wars film. However, in SWGoH, the original Lando Calrissian is our main man this upcoming month with his nice Rebel synergies and strong AoE attack. Of course having the best mods on Lando is key to maximize his abilities, so be sure to look to Gaming-fans.com for our Best Mods guides for nearly every character in Star Wars Galaxy of Heroes.

While the SWGoH event calendar has not yet been released to the public, Gaming-fans.com will be working to bring the schedule for the month of June to the community as soon as possible.