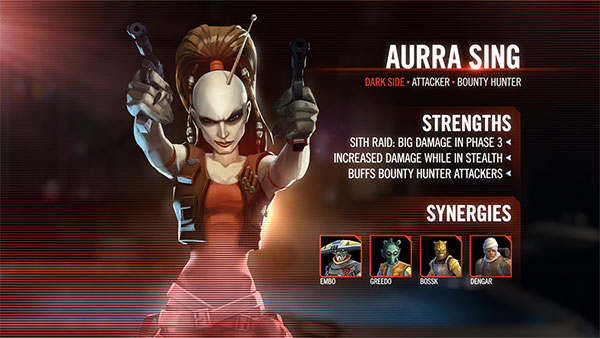 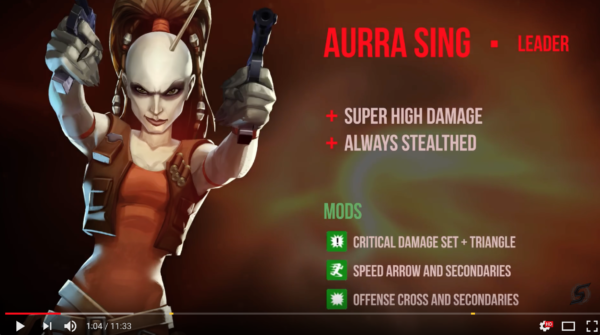 Today’s character to review mods for will be the Bounty Hunter Aurra Sing. The newest Bounty Hunter in SWGoH at the time of this writing after being added to SWGoH in August 2018, Aurra Sing is seemingly built for Raid success and was quickly shown as a powerhouse in Phase 3 of the Heroic Sith Triumvirate Raid by SWGoH GameChanger Skelturix (For specific mods used in his setup be sure to check out his team structure and details on the Phase 3 HSTR page). So which mods are best suited for Aurra Sing? Let’s take a look.

Main Focus: Offense, Critical Chance & Critical Damage. Her special, Hustle, grants her Offense Up and Critical Chance Up meaning having high Offense, CC and CD will make her hit very hard. Add in that Snipers Expertise deals 200% more damage to toppled Raid bosses and the potential for huge hits is there. In addition, Aurra Sing has +35% CD and this jumps to +70% when Sleathed and her payout gives her +25% Offense.

Additional Areas to Focus: Speed, Potency and Survivability. Aurra’s basic, Weakening Shot, has a 70% chance to Stun the target, so Potency will help enhance this. Speed is always important in SWGoH, even after Mods 2.0, so be sure to build this stat. Finally, make sure that Aurra Sing has some added survivability in the forms of Health, Defense and Protection to ensure she is not too squishy.

The “ideal mod setup” can be interpreted a few different ways. Aurra Sing is here to score big hits and do massive damage with her Bounty Hunter allies in Raids, so focusing on a set of four Critical Damage mods and a set of two Critical Chance mods. Thus, here are my recommendations for mods on Aurra Sing in SWGoH:

Hi, I love this site its been a big help and joy to read, I have question
Mods 2.0 Updates to “Best Mods” Section Underway…. will this be new section or you going to update ”SWGoH: Best Mods” Keep up all the great work

We are (slowly) working the updates into the specific character’s mod guide article. About 15 are done now leaving 145 if my math is correct. Just keep checking back – we will get there in time! 🙂