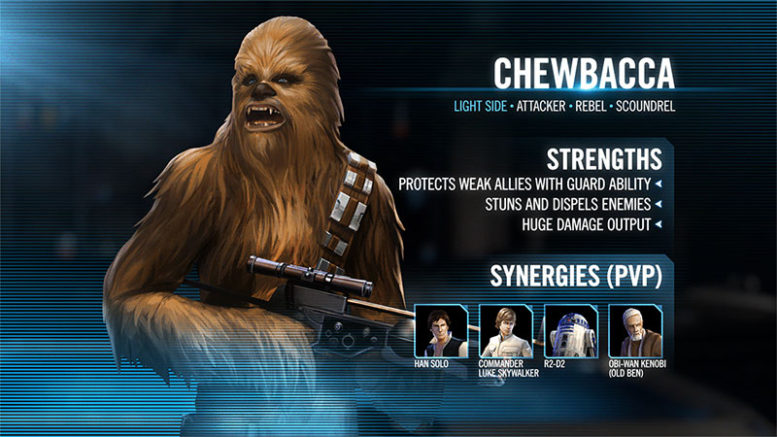 Earlier this week it was announced that the lovable Wookie Chewbacca was set to join Star Wars Galaxy of Heroes, and as part of the GameChangers program, we are pleased to reveal Chewie’s kit. A Rebel Attacker who is also a member of the Smuggler and Scoundrel factions, Chewbacca synergies well with Han Solo, Commander Luke Skywalker and more, just like in the movies.

While the actual dates for the One Tough Wookie event to unlock Chewbacca are yet to be released, we anticipate the event to take place in the next week or two. Our Director of Content, LJ, will be live blogging the event with a breakdown of the toons he is using, mods, speeds and key stats. Use the links below to view Chewie’s kit and videos from our fellow GameChangers, and be sure to check back here at Gaming-fans.com this week as LJ will test Rebel Chewie out and write his mod guide for the Wookie hero. 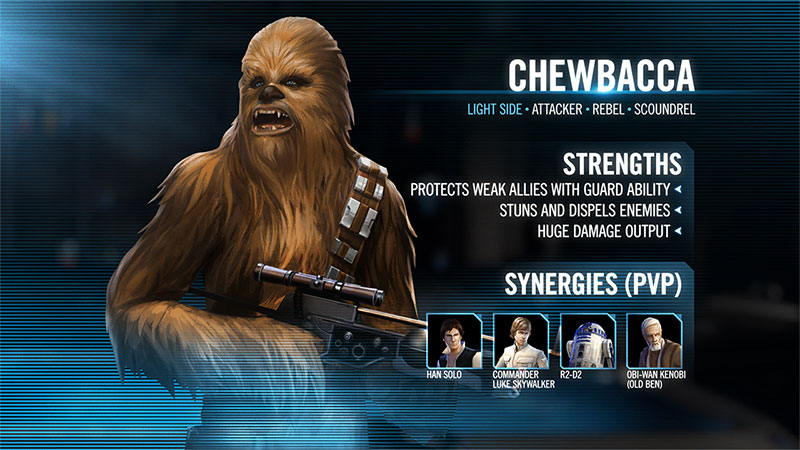 Special 1: PULVERIZE (Cooldown 4)
FINAL TEXT: Dispel all buffs on all enemies, then deal Physical damage to all enemies. Chewbacca gains Offense Up and Critical Chance Up for 2 turns. This attack ignores Defense.

Special 2: FURIOUS BOWCASTER (Cooldown 3)
FINAL TEXT: Deal Physical damage to target enemy and Stun them for 1 turn. Then, if the target has no Protection, reset Pulverize’s ability cooldown. This attack can’t be Evaded.

Unique 1: LOYAL FRIEND
FINAL TEXT: (ZETA) At the start of the battle, grant Guard to the weakest ally and Han Solo until Chewbacca is defeated. Chewbacca Assists when a Guarded ally uses any ability during their turn, doing 20% less damage, limited once per turn. When Chewbacca deals damage to an enemy, he and all Guarded allies recover 3% Health and 3% Protection.
Guard: Can’t be Critically Hit, Immune to Daze and Stun, +25% Critical Chance

Unique 2: RAGING WOOKIE
FINAL TEXT: (ZETA) Chewbacca is immune to Ability Block and Cooldown Increase. When Chewbacca deals damage to an enemy, he deals bonus damage equal to 20% of their Max Health. When Chewbacca takes damage from an attack, he gains +25% Offense and +25% Critical Chance until the end of his next turn. When a Guarded ally takes damage from an attack, reduce Furious Bowcaster’s cooldown by 1.

Here are some videos from some of our fellow SWGoH GameChangers on the addition of Chewbacca to Galaxy of Heroes: