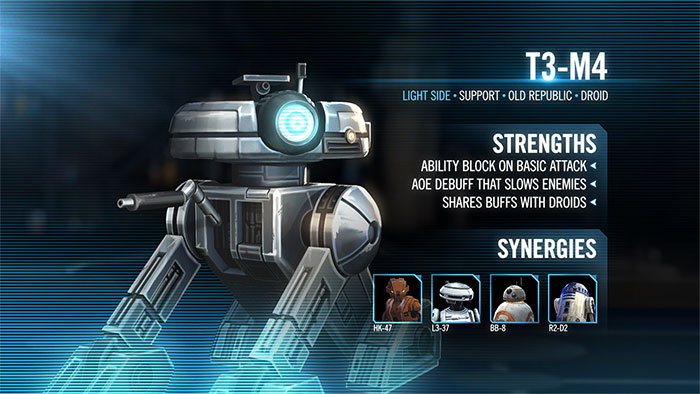 Welcome to the T3-M4 mods guide – the latest article in our series about the popular game Star Wars Galaxy of Heroes where we take a look at the best mods for each SWGoH character. While I do not claim to have all of the answers in this game, I do my research and have used every toon I write about extensively. These are mod recommendations and they are certainly not the only option. However we look to help players maximize their characters in SWGoH and we are always open to feedback if you have a mod setup that works well in your own gameplay. 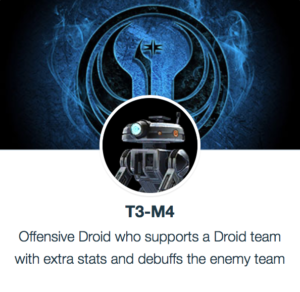 Today’s character to review mods for will be Old Republic Droid T3-M4. “Teethree” was “a late-prototype model of the T3-series utility droid, built on Taris by Janice Nall for the local crime lord Davik Kang.” One of the 5 KOTOR Light Side characters needed for Jedi Knight Revan’s Legendary Event, T3 is built in SWGoH to have more of a Droid synergy and not a KOTOR synergy. Let’s take a look at how mods can enhance T3’s kit and build on his strengths.

Main Focus: Speed. At 146 base Speed, T3-M4 is certainly not one of the faster characters in the game. The in-game recommendations say that a Speed should be used, but the way I look at it, if they wanted the character fast then he would have been designed that way, and T3-M4 is not fast in SWGoH. That having been said, this is written to help you maximize the effectiveness and efficiency of each character’s kit and Speed should be your #1 focus from the secondary stats, but I would not suggest using a high-end Speed set on T3-M4, as his value in-game is situational at best.

Additional Areas to Focus: Critical Chance, Critical Damage, Offense, Potency and survivability in the form of Health. T3 has a kit that really benefits from critical hits, so raising his CC and CD is important. His base Special Critical Chance is just 29.79% when T3-M4 has a maxed Relic, so adding a CC set or very high CC secondaries will help ensure that any added CD is not wasted. Note that “Special” as T3-M4 only deals Special Damage and deals with Special CC, not the Physical types. While T3-M4 gains 8% Potency and 8% CC (stacking) from his Combat Logic Upgrade unique, he has the ability to land both Target Lock and Ability Block debuffs meaning that added Potency makes it more likely for these negative status effects to “stick.” I have seen effective use of T3-M4 in the 3v3 Grand Arena Championships variant under a General Grievous lead given his ability to apply Target Lock, so any added Potency is going to make teams like this more effective. Added Offense will only help the critical hits, and ALL hits, do more damage, and increasing Health is likely your best way to increase survivability if using T3 in an all-droid squad with L3-37.

In-game Mod Suggestions: Speed & Critical Chance. I agree that high Speed is a must to maximize the use of T3-M4. I am just not typically a fan of using a set of four Speed mods on characters with less than 160 base Speed. As I mention below, another option is a blend of CC, Health and Potency mods to get the desired stat gains, but high Speed secondaries are a must.

The “ideal mod setup” can be interpreted a few different ways. Personally, I recommend a blend of Health and Potency mods while a set of two Critical Chance mods is not a bad idea if T3 is a highly-valued member of your roster, and if you target Speed and CC through the secondary stats on your mods you should be able to greatly impact T3-M4’s value. Here is my preferred mod setup for KOTOR’s own T3-M4:

“T3 has a kit that really benefits from critical hits.:”

Huh? What are you talking about?

Check out his Combat Logic Upgrade unique – stacking CC and CD for “Droid allies” of which he would be considered one.