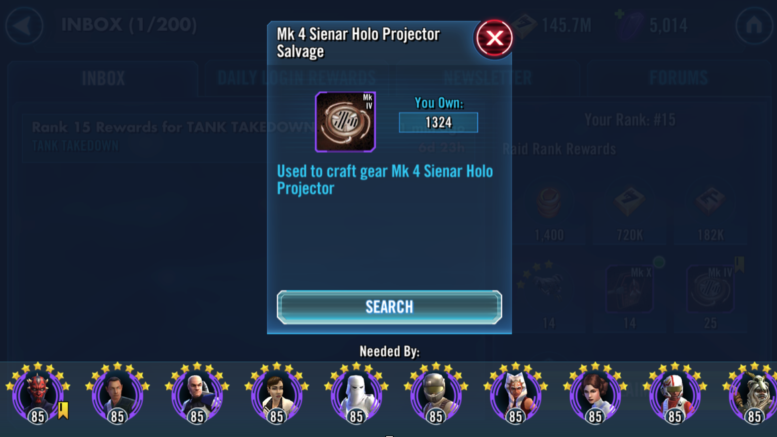 So I am back after a long break in writing these articles, and the truth is, I think the game is in a very good spot right now. Many issues have been addressed to some degree or another, but there is still one glaring problem in SWGoH: GEAR!

This is not the usual rant about give me more gear. No, this time I hope to take a slightly more nuanced approach. I will be pulling from my own experience here and showing screenshots of my own gear to illustrate. I understand that this is not going to be the same for everyone, but as a long time player who is Free to Play* (Note: I did buy the Mission and T3-M4 Packs to get Revan), I think what I am going to show you will illustrate where you yourself will soon be if you are not already there.

I have pulled out the 6 biggest offenders I can think of in my gear pile, in many ways the worst being the Mk4 Holo Salvage. As you can see I really need to equip those, but for each one of those I need a stun cuff, so I keep building up more and more of these as I collect them from HAAT (Heroic AAT) and HSTR (Heroic Sith) raids.

The truth is these pieces of gear are useful and we need them, but the way they drop is not balanced properly. That is to say you have a random chance of getting each piece, but some pieces are needed so much less than others that you will build up a huge stockpile that will never get smaller.

Under each snapshot I have shown the total number of pieces required for that gear if you maxed out an entire roster, as well as how many I have remaining. 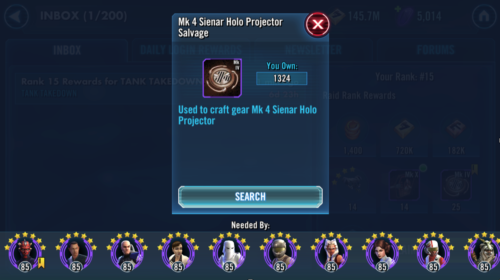 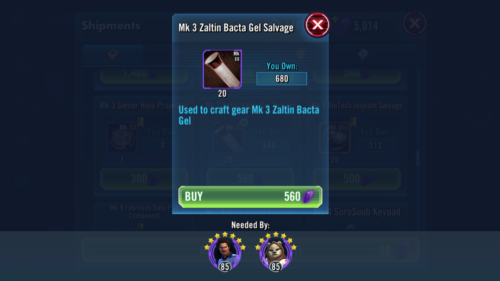 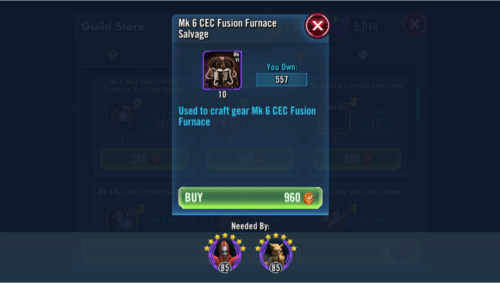 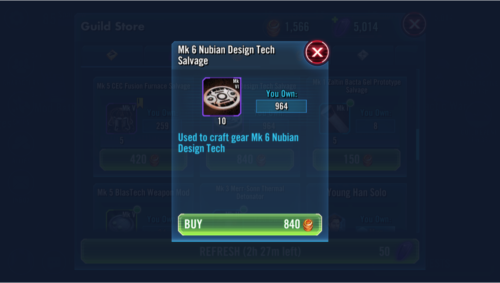 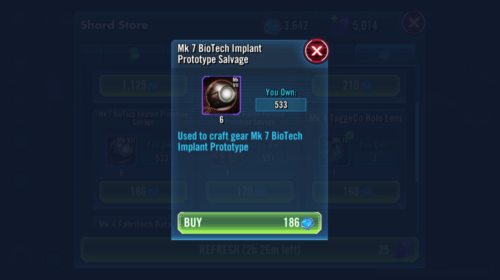 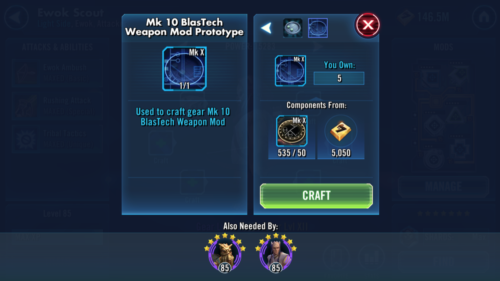 So what is my point with all of this? Simply put, not all gear is needed equally, but allowing for RNG, gear is dropped more or less equally, and so we need some mechanism to turn overly abundant gear into something else. Now I am not advocating we just have a straight up gear swap store, but having the gear properly sorted into tiers and allowing for an exchange at a reasonable rate would be a huge help to the game.

To further illustrate my point let me show you this. Rancor Raid gear includes the following:

So my suggestion is simple, allow us to exchange gear in the Guild Store, for guild currency at a 50% rate, meaning it costs 82 guild currency to buy one piece of Rancor Raid gear salvage from the table above. Let us sell our excess for 42 currency each. And in addition let us also sell any other gear that can be bought in the Guild Store at the same discount. It is simple, it’s elegant, and it merely allows us to make some use of the gear that is just gathering dust anyway.

And just as a final note, for anyone thinking this is absolutely absurd, a typical week will earn me approximately 10,000-11,000 guild currency. If I were to sell all of my Mk6 Nubian design tech salvage I would get 40,488. So the gear I have accumulated over 2.5 years would amount to just one month of guild currency. So yes if they brought this in everyone would be flush with guild currency for a few weeks, but I know I’d spend it fairly quickly buying the gear I need and then be left in a nice balanced, stable position.

I hope you have enjoyed this article, and I really hope someone who can make some changes takes a look at it.

SWGoH: Are You Passing Up the Best Deal in the Guild Store?