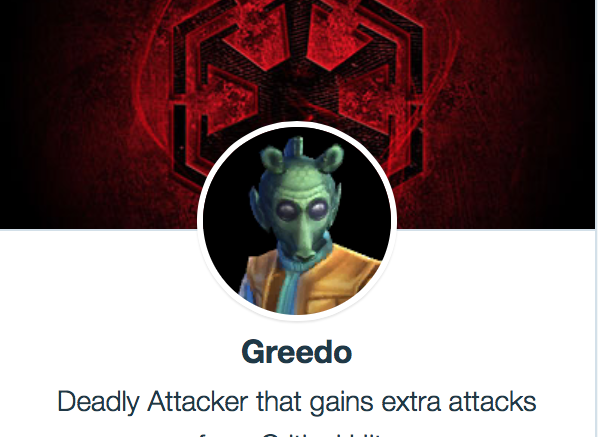 Welcome to the Greedo mods guide – the latest article in our series about the popular game Star Wars Galaxy of Heroes where we take a look at the best mods for each SWGoH character here. As your guest reviewer I cannot claim to have definitive answers but all toons I’ve written guides for have been maxed out, modded and tested to the best of my abilities. These are mod recommendations and they are certainly not the only option. However we look to help players maximize their characters in SWGoH and we are always open to feedback if you have a mod setup that works well of your gameplay. 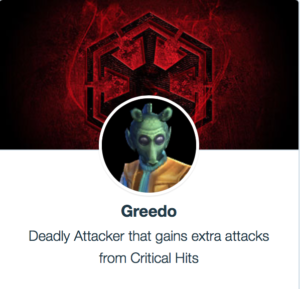 Today’s toon to review mods for is one of the sinister six bounty hunters, Greedo. As one of the most iconic of all he was a disappointingly squishy toon in SWGoH for a long time before the 2018 Bounty Hunter reworks. Greedo gained importance in the Dark Side Territory Battles, aka Imperial Retaliation, where Bounty Hunters are required on the map.

A look at his kit shows that his basic attack, WHO SHOT FIRST? does physical damage & has a 70% chance to grant Greedo Potency Up, and he has +25% CD when attacking an enemy with a Thermal Detonator with his basic. His special EXPLOSIVE SABOTAGE places thermal detonators on all enemies which explode after 1 turns with a 25% TM gain for Greedo when each one explodes. His new special, THREATEN, grants allies CC Up and reduces the enemys’ Turn Meters and can Stun them. He has a leader ability, AMBUSCADE which simply grants all Scoundrel allies 50% Critical Damage. His unique IF AT FIRST YOU DON’T SUCCEED grants Greedo 15% Critical Chance, and a 50% chance to attack for a second time whenever he scores a critical hit. Finally, GREEDO’S PAYOUT, has +50% Health Steal, +25% CD and +75% CC.

Main Mods Focus: Although a relatively easy farm, Greedo is a toon who is often left out of most Bounty Hunter teams. However, if modded properly, he has a nice synergy with his Thermal Detonators and Zam’s basic and his newly-added abilities work well with the other Bounty Hunters. As a main focus from his mods we suggest Speed, likely from the secondary mods stats, and then build other stats after that. Remember that Bounty Hunters gain Speed boosts from the leader abilities of both Boba Fett and Jango Fett.

Additional Areas to Focus: Critical Chance, Critical Damage, Potency and survivability. Given the ability to gain Potency Up on his basic and land Thermal Detonators, Potency is important to make him more effective and ensure those things stick. Critical Chance and Critical Damage from the mods will greatly impact his basic as well as the Threaten special, his If At First You Don’t Succeed unique and his leader ability. Finally, add survivability to help Greedo last longer. Health would be a great start given his Health Steal granted in Greedo’s Payout, and under a Bossk lead, Bounty Hunters gain +50% Max Protection and +50% Tenacity plus +100% Defense when at full Health, so adding more Defense will bolster this.

I recommend the use of a set of four Critical Damage mods and a set of either two Potency, Critical Chance or Health mods based on the secondary stats. If any of these offer you the secondary stats to maximize Greedo’s other stats, you really cannot go wrong. My suggestion for the best mods to use on Greedo in SWGoH are: