After more than a month without any new characters or ships added in Star Wars Galaxy of Heroes, Gaming-fans.com and the EA GameChangers for SWGoH are pleased to announce the latest addition to the game – Han’s Millennium Falcon. Hinted at by Capital Games and later verified, the Falcon is set to make the Rebels relevant in today’s Arena Squad META. Let’s take a look at the kit below and we will look to add links to YouTube videos from some of our fellow SWGoH GameChangers below as well, and be sure to check out our live blog of the event. 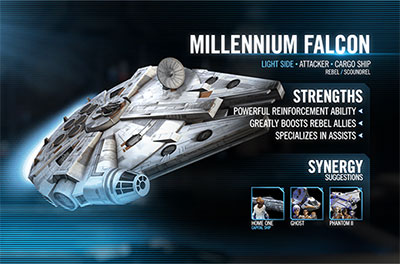 ABILITIES:
Basic: SPECIAL MODIFICATIONS
FINAL TEXT: Deal Physical damage to target enemy and call another random Rebel ally to assist. Inflict Target Lock for 2 turns on a Critical Hit. If the allied Capital Ship is a Rebel, dispel all buffs on target enemy.

Special 1 (Han): WATCH THIS (Cooldown 3)
FINAL TEXT: The Falcon dispels all debuffs from itself, recovers 50% Health and Protection, and gains the Outmaneuver unique buff for 3 turns (can’t be copied). Additionally, it gains 35% Turn Meter for each Rebel ally and Empire enemy.
Outmaneuver: +25% Evasion and can’t be targeted while other allies are present

Special 2 (Chewbacca): PUNCH IT! (Cooldown 4)
FINAL TEXT: Deal Physical damage to all enemies and grant all allies Defense Penetration Up for 2 turns. This attack deals 25% more damage for each Dark Side and each Empire enemy.

Unique: SHE MAY NOT LOOK LIKE MUCH
FINAL TEXT: All allies gain 10% Critical Chance, doubled for Rebel allies. The Falcon has a 50% chance to assist whenever another Rebel ally uses an ability during their turn. Whenever an ally reinforces, the Falcon grants them Accuracy Up for 2 turns. If that ally is a Rebel, they also gain Critical Damage Up for 2 turns. Additionally, when another Rebel ally is inflicted with 3 or more different debuffs, the Falcon dispels all debuffs on them.

Reinforcement: YAHOOO!
FINAL TEXT: Grant all other allies Foresight for 2 turns and call all Rebel allies to Assist. Additionally, reduce the cooldowns of the allied Rebel Capital Ship by 1 for all abilities except Call Reinforcement.

Be the first to comment on "SWGoH GameChangers: Han’s Millennium Falcon Kit Reveal"