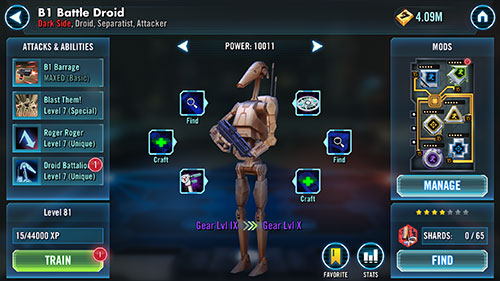 Welcome to the B1 Battle Droid mods guide, the latest article in a series about Star Wars Galaxy of Heroes where we take a look at the best mods for individual characters. While I do not claim to have all of the answers in this game, I do my research and have used every toon I write about extensively. These are mod recommendations based on the character’s kit and actual gameplay to help you in your quest to dominate the Galaxy of Heroes holotables. 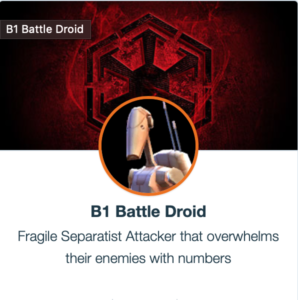 Main Focus: Speed. If you’re going to be using the Separatists Droid faction extensively, invest a ton of Speed into this bot. His base Speed of 165 at Gear 13 is very strong making him a must for a set of four Speed mods, and if you have him super fast and hitting Target Locked enemies he will drastically improve the survivability of the team.

Additional Areas to Focus: Potency & Offense. Since survivability stats are obsolete with this character, stay away from Health, Protection, Defense and even Tenacity. Plus, Critical Chance and Critical Damage are also out of play since his Droid Battalion unique states that B1 “can’t score critical hits.” Thus the focus needs to be on Speed, Potency and Offense alone from all mod stats gained. Once could argue for an Offense set with high Speed secondaries for the B1 Battle Droid, and that certainly is not a bad choice, but I have found through extensive testing that using the Speed set is far more effective.

Note that his basic, B1 Barrage reads “If target was Target Locked, all Droid allies recover 5% of their leader’s Max Health and Protection.” Let’s break this down for a moment as the obvious part is the “recover 5% of their leader’s Max Health and Protection” which can easily be traced back to the stats and mods on General Grievous. Yes, a higher Max Health on Grievous is going to play right into the B1’s abilities to help assist his team, however let’s look a little deeper. This is not limited to Separatist Droids but “Droid allies” meaning this ability may be an indication toward other droid leaders in the future.

Speed Priority: 7/10 – This rating is all about how important B1 Battle Droid is on your roster. For me, the Separatist Droids are about the 9th or 10th strongest faction on my roster and while they get used in Territory Wars at times and as one of my Grand Arena offensive counters and sometimes on defense, I just cannot justify having my top Speed mods on B1. As a result my B1 runs at around 260 Speed, although I would much prefer him up around 300 to perform better as a GAC or Territory War counter.

In-game Mod Recommendations: Offense & Potency. Once again, these “advanced” mod tips are general and I have a hard time agreeing with them as a result. Our recommendations are above so I would suggest that you follow our recommendation of Speed first with CG’s tips as the secondary ares of focus.

The B1 Battle Droid has a highly interesting and unique kit that is a fun one to use in-game. To maximize his abilities and use him effectively and efficiently, I recommend the use of a set of four Speed mods and a set of two Potency mods with as much Speed, Potency and Offense as possible from the secondary stats. For those with an awesome inventory of Offense mods I suggest testing a set of four Offense mods with high Speed secondaries as well. However, here is my preferred mod setup for the B1 Battle Droid: