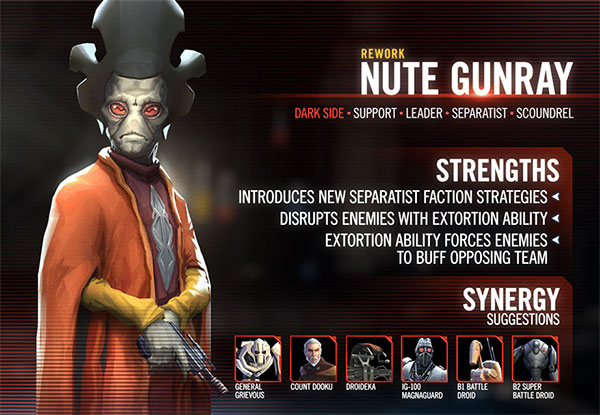 As we learned weeks ago, the next steps in the Clone Wars era content on Star Wars Galaxy of Heroes would be reworks of both Count Dooku and Nute Gunray. Today, we now have that information. 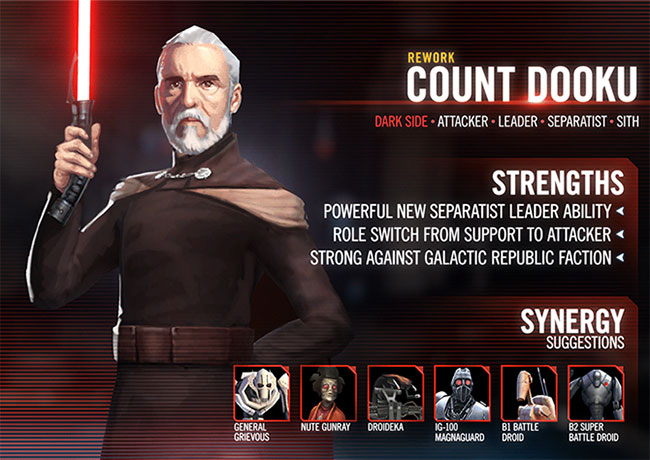 To start with, Count Dooku, originally a Support character, is changing his role from Support to Attacker. His character description will now read “Disciplined Separatist Attacker with high damage, counter attacks, and debuff capabilities,” which leads me to believe that we will get a boost offensively given he hits like a feather currently. His Leader ability, which was popular in the old Dodge META in the early days of Galaxy of Heroes, will now read “Separatist allies have +35% counter chance and gain 50% Tenacity the first time they are Stunned or Dazed. Whenever an enemy falls below 100% Health they inflict Tenacity Down and Healing Immunity for 2 turns on themselves, which can’t be evaded or resisted, and all Separatist allies gain 10% Offense (stacking, max 50%).” The changes are clearly designed to make him a highly-effective counter to any Galactic Republic team. Early thoughts continue to lean toward Speed and Potency mods for Count Dooku, but a deeper dive into these details will come this week.

For Nute Gunray, the changes are much more drastic. Everything with Nute seems to center on the new Extortion debuff which, in fairness, at this time is not really clear. All of the released details by CG on Nute Gunray’s reworked kit can be found here. One major note is that in Nute’s Viceroy’s Reach unique it reads that “The first time Nute Gunray is defeated, he is revived with 100% Health and Turn Meter. Every time Nute Gunray is revived, he Stealths for 2 turns.” This seems highly annoying, and annoying characters in SWGoH are often very effective characters. A complete rework of the Nute Gunray best mods page will come likely this week as I get a chance to really break this new kit down.