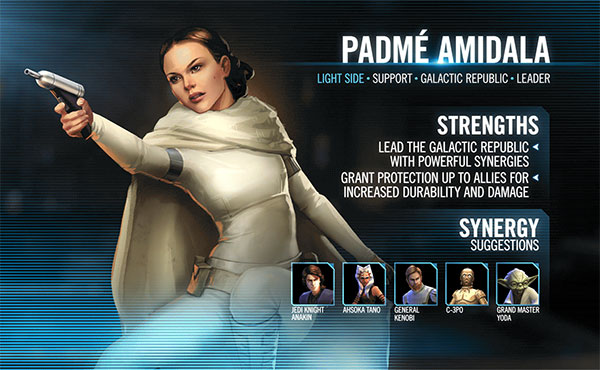 Welcome to the Padmé Amidala mods guide, the latest article in our series about the popular game Star Wars Galaxy of Heroes where we take a look at the best mods for specific SWGoH characters. While I do not claim to have all of the answers in this game, I do my research and have used every toon I write about extensively. These are mod recommendations based on the character’s kit and actual gameplay to help you in your quest to dominate the Galaxy of Heroes holotables. 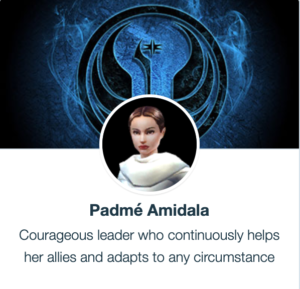 Today’s toon to review mods for Padmé Amidala, the former Queen of Naboo turned Senator in the Galactic Republic. Added to the game in May 2019, just a few weeks after reworks of Jedi Knight Anakin, Ahsoka Tano and General Kenobi, Padmé joined us through the Aggressive Negotiations Legendary SWGoH Event. The rework of the three Clone Wars Jedi saw the trio become significantly more powerful and relevant in the game, and the addition of Padmé strengthens the Galactic Republic even more. Let’s take a look at which mods and stats we should focus on in Galaxy of Heroes to make Padmé Amidala even more effective.

Main Focus: In Star Wars Galaxy of Heroes, Speed if the key to getting to a character’s turn quickly. But once you get to that turn you need to use the abilities available to you effectively. For Padmé, her kit is so incredibly built around Health (more on that to come) that you really need to focus on Health first, even above Speed, but with Speed as a strong focus.

Now, let’s talk about why you need Health on Padmé. As we have been telling the SWGoH community for well over a year, since Protection Up is a stat based on Max Health in Galaxy of Heroes. While we thank the devs at CG for clarifying this publicly, this has been ingrained into our mod guides time and time again as we look to educate the community properly. So, with Health as the key stat for Protection Up, and all of her kit dealing with Protection Up and NOT Protection recovery, Health is the stat that you want to focus on both from Health mods and high Health secondary stats. Note that the introduction of Relic amplifiers has made Health even more important as Padme’s Relic upgrade to Level 7 adds nearly 20k Health. Finally, if you want to have a shot at beating the Geonosis Territory Battles Phase 1 Special Mission with Padme, you need to have ridiculously high health on Padme.

Additional Areas to Focus: Speed, Potency, Offense and Defense. Speed, as mentioned many times on this site, is the necessary evil for 98% of SWGoH characters if you want them to be effective. Padmé is no different and high Speed secondaries are going to be important to make her as effective as possible, however there are some strategies where a slow Padme is more effective, like in the Darth Revan TW/GAC counter. Potency will help her Graceful Assault special land the Stun debuff, and more Offense can help her hit a bit harder, but I would not sacrifice any Speed or Health to raise these stats. Defense is the lone other stats I would look to put a significant emphasis on simply because added Defense makes the hits hurt less, and given the overall survivability of Padmé Galactic Republic teams this will further annoy your opponent. Protection is certainly not a bad stat to get from the secondary stats of your mods, but do not choose it over anything else and be sure to have a Health primary on the circle mod. Final item, while you could add Critical Chance and use a Critical Damage primary from your triangle mod to enhance both, I am staying away from adding CC/CD if it impacts the Health stat in any way. Given the triangle mod has a Health primary as an option, that is my preferred choice.

Speed Priority: 6/10 – Padme is not a character I invest my fastest mods on, but I do have some very nice Health mods with strong Speed (+12 to +17) secondaries on for day-to-day play.

In-game Mod Recommendations: Health. I agree as long as a significant effort to get Padmé’s Speed as high as possible is made as well (if you’re looking for a faster Padme of course). Personally, I say stick with Health, Health and more Health.

Padmé has a kit built around the survivability of her Galactic Republic allies and the annoyance of her enemies. While three sets of Health mods (6 total) are ideal, getting the primary stat on the circle, triangle and plus/cross mods as Health with a solid Speed secondary is important to maximizing her effectiveness. Here are my mod recommendations for Padmé Amidala in SWGoH: