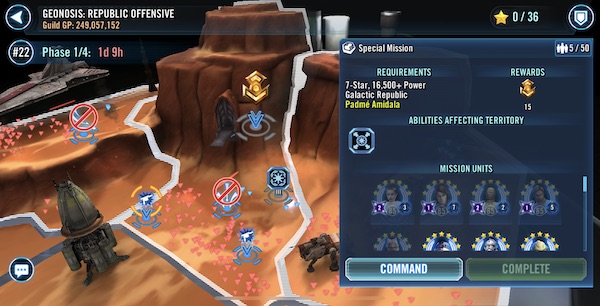 The following is a Walkthrough of my experiences in Phase 1 that will be updated over time. Phase 1’s Special Mission requires a 7-star, 16,500+ power Padme Amidala and four other Galactic Republic characters of the same strength to participate and rewards 15 Mk II Guild Event Tokens to all guild members for a victory.

12.02.19 – Based on my numbers above and the need for characters at 16,500 power I should be fine on this first Special Mission, right? We are about to find out.

With a combined squad power of 133,356 my team enters the battle to find several Separatist Droids who get a bunch of attacks in before I can blink, leaving Ahsoka in yellow health already. I stun the BX-series Commando Droid then take out the B2 Super Battle Droid first, followed by the Commando Droid, but then GK takes a few hits and is now in yellow health. I am able to take out the MagnaGuard and get GK healed up, leaving just the B1 and Droideka who pose no threat by themselves.

The second wave of enemies include a B2, two standard B1s, a MagnaGuard, a Droideka and a B1 Heavy Gunner who looks like he is waiting to look through a telescope at the stars. The MagnaGuard is the first to die, although not really by my choice, then the B2, but I lose Ahsoka. Next I lose Padme and GK as this battle unravels completely. JKA is gunned down and once again, just like the General Skywalker waste of money and a weekend, the “recommendations” by Capital Games are complete and utter crap.

12.16.19 – First off, my expectations are low. After seeing how this played out the first time around my overall thought is simply this – spending money on today’s SWGoH is worth less than at any time before. People who have invested several hundred dollars since the debut of Relics are being played for fools by Capital Games if this game mode is actually tuned to the levels they truly want. Don’t get me wrong, I am all for a challenge and always have been. But I also know how much people pour into this game and I know how hard it is to have a roster even as strong as mine. If Phase 1 is indeed supposed to be this difficult it just shows how out of touch the studio is with their game and players at all levels.

(Steps off of soap box)… As for the battle, I take out B2 first but take a few hits AND he lands a hurtful buff dispel on my team. Droideka does some crazy stuff and my GK is dead causing me to fight back curse words. Gear 13, Relic 5 and six 6-dot mods on GK and he is dead just like that… Padme take a couple of hits and I kill off Droideka, but it’s clear how this will end. Padme is able to heal up and I kill off the BX Series Command Droid leaving the Magna and B1 to finish the first wave of enemies. Several basic attacks later I am on to the second wave of enemies.

The second wave of enemies is different than before with the B2 mentioned above replaced by a Command Battle Droid (CBD). After taking the MagnaGuard out I take a ton of hits and start working on the CBD and have him in the yellow health but lose Padme as I am unravelling. I am not even able to kill him off before they take out Padme, JKA and finally Ahsoka to finish me off. This is in Phase 1 folks… Phase 1.

01.17.20 – While I have made some improvements to this team from the last go-around, my expectations remain low. Outside of my JKR Jedi team’s success, I have not found anything else that works in this crazy-hard Territory Battle, which I, I mean CG_NotADev, feels completely disrespects any previous investments made into SWGoH. Now for the fight…

The first wave of enemies starts off with a barrage of attacks before I get to even go, and reality has set in about how stupid this battle is. As soon as I am able to knock out the B2 they kill my 27,670 power, Relic 4 Padme in a single attack. Freaking ridiculous. I am able to finish off this wave of enemies, but there is no chance after this wave anyway.

The second wave of enemies at least allows me to take the first couple of turns, but before I can defeat a single enemy my Relic 7 GK and JKA are dead along with C-3PO, leaving Relic 6 Ahsoka one hit from being defeated. She takes her turn and it is over.

I need to bottle this frustration and open the bottle the next time CG puts one of those stupid expensive Relic packs in front of me. No game mode is going to be fun when early battles are this untouchable despite so much money spent already…

After a more than year of attempting this battle each month and failing, I am now in a Top 10 guild in the game and guess what, the guidance here is amazing. Here is a high-level look at the team that finally defeated this crazy Special Mission:

01.12.21 – The fourth wave of enemies included a B2, B1, General Grievous, Wat Tambor and a MagnaGuard. Taking out the B2 first, I got stuck behind the taunt of the MagnaGuard for a while before I could get to the B1 enough. Luckily all of these high Health characters had the survivability to withstand the attacks and after taking the B1 and MagnaGuard out, GG was no problem as I picked up my first win on Phase 1’s Special Mission.