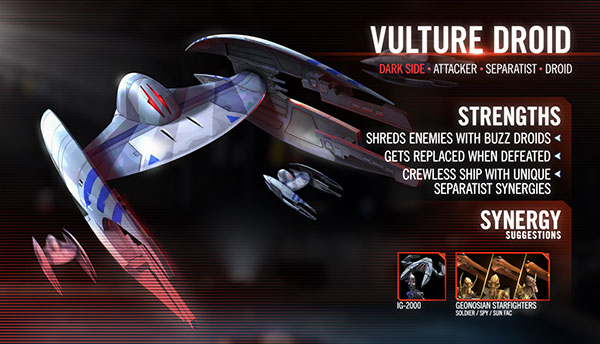 ABILITIES:
Basic: Unrelenting Attack
FINAL TEXT: Deal Physical damage to target enemy. If the target was debuffed, this attack has +25% Critical Damage. This attack does not remove Buzz Droids.

Unique 1: Swarming Terror
FINAL TEXT: When another Separatist or Droid ally uses an ability during their turn, the Vulture Droid is called to assist if the target enemy has Buzz Droids. At the start of each enemy’s turn, if they have at least 1 Buzz Droid, the Buzz Droids reset to 3. At the end of each turn, if an enemy’s Buzz Droids were dispelled, inflict Ability Block on that enemy for 1 turn, which can’t be resisted.
When this Vulture Droid is defeated, it summons another Vulture Droid if the allied Capital Ship is Separatist and there is an allied combatant

Be the first to comment on "SWGoH: Vulture Droid coming to Galaxy of Heroes"