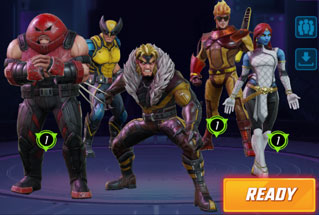 One of the Legendary characters in Marvel Strike Force, Magneto is a must-have on any effective Brotherhood team in the game.

The following is meant to be a living progression of my roster as I look to unlock Magneto. One of the Legendary event characters in Marvel Strike Force, the Asteroid M event allows players to compete to unlock shards of Magneto. The Asteroid M event requires 5 X-Men or Brotherhood characters to unlock Magneto, who opens at 5-stars (310 shards). You must beat all lower tiers before advancing to the next tier level.

I will start my efforts at the 5-star level given I completed the first four tiers during previous events and today will have the opportunity to unlock Magneto and power him up to 6-stars.

08.11.19 – This will be my first attempt at Tier 5 as I barely remember any of the previous boards, however I know I fought them before the expansion of X-Men characters in Marvel Strike Force, using Wolverine, Storm, Pyron, Juggernaut and Sabertooth. Here is a look at my X-Men & Brotherhood roster for this event today:

Tier 5 – Tier 5 is described in-game as needing a recommend Level 60+ characters, Gear 9, Level 5+ abilities. I expect this to be easy without any trouble at all in opening Magneto.

Facing 16 enemies, I start piling debuffs on them as they fall one by one. Few enemies last beyond a single attack and Phoenix never gets below 50% health, let alone close to summoning Dark Phoenix.

Tier 6 – Tier 6 is described in-game as needing a recommend Level 60+ characters, Gear 9, Level 5+ abilities. I expect this be mildly challenging as I will likely lose Juggernaut, but Phoenix is so powerful that she should get the decisive win for the (215k power) team.

Defeating 10 enemies is the goal here with 8 Cosmic characters on-screen immediately. While the battle appeared to be going well for the enemies at first, once they killed Phoenix and she summoned Dark Phoenix it proved to be the beginning of the end. In the end I won with ease and Juggernaut barely even took damage.

Tier 7 – While Mystique and Sabertooth are also options, both are weaker than the above characters and I like this combination of skills.

The task is to defeat 16 enemies, and 7 SHIELD and a AIM Operator are the first 8 on the screen. It is apparent from the start that I am far stronger than my opponents, and actually take out Quake before the second group of 8 appears. 300 shards of Magneto and 1m gold are the rewards.