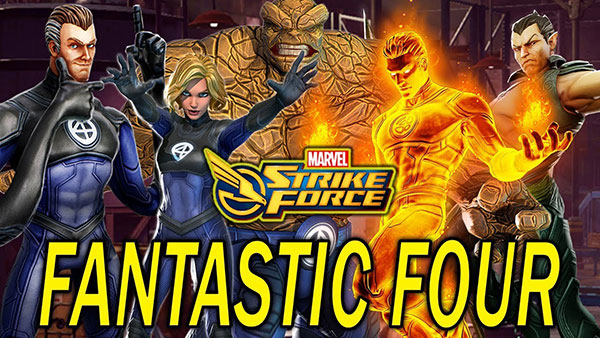 MARVEL Strike Force and the FoxNext Envoy program are pleased to announce that the next Legendary Event in the game has been determined as we release this info to the community for the first time. Below is the blog post that will be released later today by the development team.

The Fantastic Four’s Legendary light bender is on the way, and if you’re familiar with the Fantastic Four and Sue Storm, you know that her Legendary title is well-deserved. She’s the most integral member of the team and the same holds true in MARVEL Strike Force.

Invisible Woman is a Protector who hides her allies from enemy attacks by removing their negative effects while also applying Stealth, Barrier, and Deflect to them. For an encore, she also removes enemy Stealth, boosts the Health of Namor and Fantastic Four allies, and provides protective recoil attacks when they have Barrier.

Mister Fantastic, Human Torch, Invisible Woman, and the Thing make up the core Fantastic Four members and together are a versatile powerhouse. When you add the offensive abilities of Namor to the team, these five characters become the rulers of War.

Basic
Attack the primary target for 290% damage and then Barrier self for 10% of this character’s Max Health.

Ultimate
Apply Offense Down for 2 turns to all enemies.
Barrier all allies for 40% of this character’s Max Health.

Passive
When an enemy attacks a Fantastic Four ally with Barrier, attack that enemy for 250% damage.

Invisible Woman is a 5-star unlock and you’ll need a 5-star team of the City’s newest Villains — the Sinister Six — for a chance at acquiring the keystone Fantastic Four member. Green Goblin is already available in Nexus 5-6 and we’ll be making the other members available next week. Shocker is heading to his own campaign node, Vulture is flying into the Arena store, and Mysterio is appearing in the Raid Store.

MSF: How to Unlock & Power Up Namor