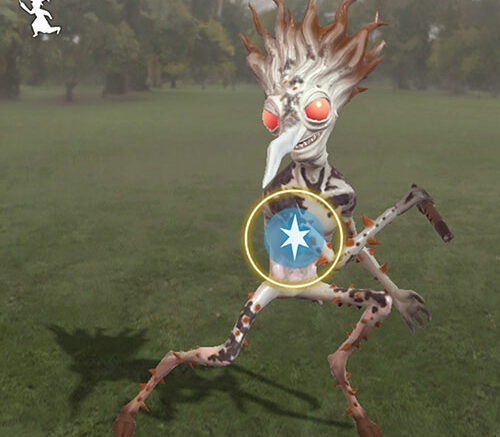 While Traces are found all across the globe in Harry Potter Wizards Unite, specific Foundables can be uncovered in the game at different times and in differing locations. One Foundable category is Oddities, indicated by a light purple icon. Oddities are different than the other Foundables in the game as you actually have to “battle” an Oddity.

Below is a list of the Oddities in Harry Potter Wizards Unite. As the number of Oddities expand in the game we will of course update this list, specifically with the addition of Dragons at the upcoming Fan Fast in Indianapolis.

Brown Centaur – Brown Centaurs can spawn at any time, including at dusk and dawn, but are most commonly found at day and at night.

Dragons – The newest Oddity in HPWU, the four Dragons in-game currently are region-specific and can spawn during the daytime hours.

Doxy – Doxies are very difficult to catch because they are only available at dawn, however they are plentiful during the dawn hours. Note that Doxy droppings are needed for S.O.S. Assignment #14.

Erkling – Most popular in Fortresses (Wizarding Challenges), Erklings do not seem to dodge as much in Oddity form. These annoying little Oddities are marked with a yellow light and can spawn at any time, including at dusk and dawn, but are most commonly found at day and at dusk.

Horned Serpent – One of the top Foundables in terms of XP in the game at 500, Horned Serpents are not found during the day, but they are found at dawn, dusk and at night. They are marked with a red light.

Leprechaun – Possibly the easiest Oddity to defeat in the game, Leprechauns spawn during dawn and dusk.

Pixie – Known for being common in Fortresses (Wizarding Challenges) and for the difficulty of finding Formidable Pixies in S.O.S. Assignment #12, Pixies are only found as Oddities at night.

Vampire – Only found at night, Vampires may have the slowest animation in the game, so don’t fight them if you are in a hurry.

Werewolf –  The Werewolf is only found at night on or around a full moon. Werewolves are needed for S.O.S. Assignment #14 which requires Werewolf tufts.

Be the first to comment on "HPWU: Oddity Spawns – When and Where to find Oddities"