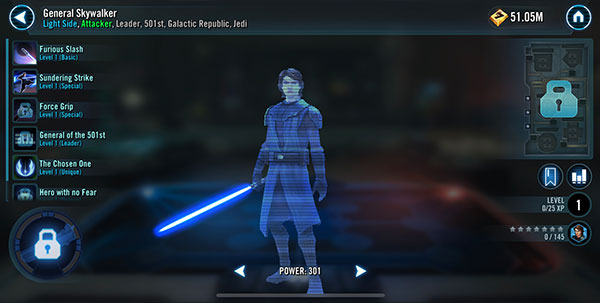 As I have done for almost every Legendary event in the past two years, I will once again be live blogging my experiences from the new Clash on Kamino which takes place this weekend. Starting tomorrow, October 11th, this event is expected to be one of the toughest events in the history of Star Wars Galaxy of Heroes. Like the Darth Malak unlock event in April 2019, qualified players will be able to compete in the latest Epic Confrontation event in SWGoH, this time to try to unlock General Anakin Skywalker.

Below I will detail my roster of characters needed and then, once the event is live and my schedule allows, I will chronicle my experience fighting the event. I will work hard to detail what I see and how I attack the four phases to battle. All of this will, of course, take place on my personal account and I thank you in advance for your interest.

Battle #1 – The Battle Up There

Starting with the ships, I felt as though I was missing something the first few minutes of the battle. My starting lineup included Ahsoka, Fives and the Clone Sergeant ships and while I survived, it was not smooth at all. General Grievous’ ship remains in Stealth and places a forced taunt on the Vulture Droid ships. The keys to the battle, in my opinion, were Plo Koon and the Clone Sergeant taunting and Windu’s Capital Ship placing the taunt and Crit Immunity to the Clone Sergeant’s ARC-170.

In the end you receive 50 shards of General Skywalker (no crystals or credits Capital Games, really?) and the chance to move on.

I fought this about an hour ago with my team, as constructed above, and got slaughtered. I decided to do so with no pre-conceived strategy, no videos or datamine to tip me off on strategy, etc. So here are the changes I am testing out:

This proved to have better results, but certainly not good enough. I took out a MagnaGuard but that was about it. Back to the drawing (whaling) board…

I decided to start moving mods around – something I hate doing – as moving mods in this game is a pain in the butt, even after the addition of Mod Loadouts I still find the process to be annoying and messes up my nicely-organized roster. When we’re dealing with 6 mods on 150+ characters we’re talking 900+ items to keep track of so when events like this come around I really hate this part of the game.

My changes here include moving General Grievous’ mods to Padme, Darth Malak’s mods to C-3PO to speed him up and add more survivability and Bastila Shan (Fallen) t0 Ahsoka. We will see if this makes a difference and if more is needed…

The results? I definitely competed at a higher level but still lost without much success. The change in turn order was important so I am pleased to see progress.

So more gear and improved mods after a review of Shaak Ti that included moving Darth Revan’s mods to her, along with upgraded Relic Levels it bring me to this point:

This battle proved much more effective in making progress as I remover both MagnaGuards and the B2 before dying, but it was still not enough. I still have yet to consult my guild or other media sources for strategy, etc. due to my schedule today, so that needs to come next.

The kids are in bed and the day has wound down and I finally can concentrate a bit. I moved around all of those mods, watched this video from AhnaldT101 and have things in order so here we go.

Starting off I target the B2 and kill him off ASAP. Once he is down killing and dispelling the MagnaGuards to be able to get to the Droidekas is the key while leaving the B1 to keep attacking. Meanwhile, all throughout this adding the Protection and Tenacity to General Kenobi sets your team up for success. This approach proved to be the difference, especially now that I spent the gear on these characters and moved mods around.

Another 50 shards of General Skywalker are the reward.

Thanks to the AhnaldT101 video mentioned and linked above I know how to attack Asajj. If you have not seen his video he shows us a little of what to do and what NOT to do lol. Using the middle ability first and the other special when available, this battle sets up the final showdown to unlock General Skywalker.

I am not watching AhnaldT101’s video (yet) so that I can experience the slaughter organically the first time around. While my mods are not amazing, I always have my main characters well-modded, but this will be a slap in the face most likely.

My Clash on Kamino experience looked a lot like my battles against the Separatist Droids earlier but not as one-sided initially. I am going to watch and see what Ahnald says before I do too much with mods and gear and try again…

In battle, you want to get the protection off of General Skywalker and then take out Fives and Echo then the Clones on the right. So far in probably 10-15 attempts I have been able to get down to one clone and General Skywalker left, but no closer.

I continue to add more Relic levels, move mods and more and have now fought this event a good 40-50 times. My frustration level is high and it is causing my family to get rather annoyed with me which has me thinking a bit differently about SWGoH…

Here is a look at my updated Separatist characters:

10.13.19 @ 2:47 pm – I am going to open General Anakin Skywalker today, one way or the other… I tried the slow Droideka option since his kit is designed to work that way, and now I am trying the fast Droideka. I now have the best possible mods from my roster on these 5 characters and have upgraded a few Relics. I also have slowed down my B1 and added more offense in hopes that he can hit harder.

Another 20+ battles and I cannot help but get more and more frustrated. I have been watching videos from Mobile Game, AhnaldT101, a guy I was not familiar with before named “It’s Just Ian” and more. Special thanks to each of them plus my guildmates in DotE for their advice.

In the end it was a fast Droideka, offensively-driven (not Speed) B1 and way, way, way too much money that helped lead to the crazy good RNG needed to beat this event. I tool out Fives, then Echo followed by Rex and the ARC Trooper and had Droideka and B1 left in the end as I took the win to unlock a 5-star General Skywalker.

With GAS now unlocked, it is on to review the best Zetas for the 501st & General Skywalker. 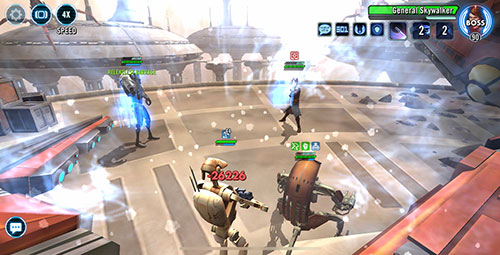 My advice for Capital Games is this. If we spend money we should see the benefit. I spent on this event and upgraded mods, Relics, gear, etc. over and over again only to see little to no progress each time. Honestly, I started thinking about how McMole2 is quitting the game and how much I have heard from CubsFanHan and others about the direction of the game. CG really needs to be careful at this point in my opinion – this game is in a funky spot right now and I am seriously worried about what they are doing to the long-term health of this game. Yes, a good quarter is important, but 10 years of good revenue is better than 1-2 great years, so I am hopeful that the executives realize this (I am not holding my breath).