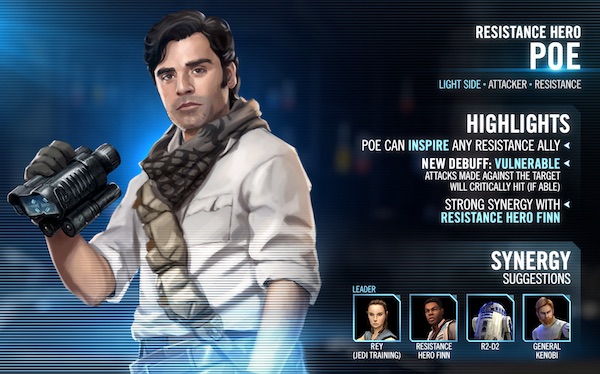 Welcome to the best mods for Resistance Hero Poe, the latest article in our series about the popular game Star Wars Galaxy of Heroes where we take a look at the best mods for SWGoH characters. While I do not claim to have all of the answers in this game, I do my research and have used every character I write about extensively. These are mod recommendations based on the character’s kit and actual gameplay to help you in your quest to dominate the Galaxy of Heroes holotables. 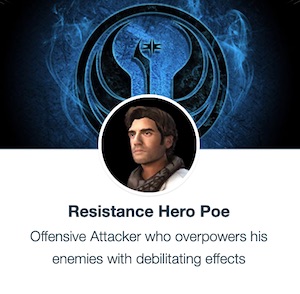 Today’s character to review mods for will be the new version of Poe Dameron in SWGoH, Resistance Hero Poe (RHP). Only the second Resistance character added around The Rise of Skywalker and third character overall a month after the movie’s release (?), RHP has a kit that fits well with his fellow newb Resistance Hero Finn. RHF’s Inspired buff is key to maximizing RHP’s effectiveness, so let’s delve into that duo and review the best mods for Resistance Hero Poe below.

Main Focus: Speed. With a Speed of 174 when maxed out, using mods to enhance this Resistance Attacker is the way to go. Nearly every character who is known for offense in SWGoH needs to have Speed to be effective, and Resistance Hero Poe is no different. One note, strategically all signs continue to point toward making Resistance Hero Finn the faster of the two, and given his maxed out base Speed is 183 (9 higher than RHP), this should fall into line quite well.

Additional Areas to Focus: Offense, Critical Chance, Critical Damage, Poe-tency, Tenacity and survivability in all forms – Health, Protection and Defense. Offense is the main route to getting big hits from RHP’s attacks, but some CC and CD can help a bit too. Note that because Resistance Hero Poe deals Special Damage, this means he will rely on Special Critical Chance which is usually much lower than Physical CC. Poe-tency is more than just a dad joke, but also important to RHP’s kit. He can inflict debuffs on all three of his attacks, with the two specials relying on Potency to land Daze, Stagger and Stun. Finally, survivability enhancements are wise, Tenacity included. Resistance Hero Finn’s Spark of Resistance unique grants Resistance allies +50% Defense and +50% Tenacity when he is inspired, so boost these stats with any Resistance character used with RHF, RHP included. In addition, that same unique of RHF will benefit Resistance Hero Poe’s recovery of Health and Protection as well, so boost all four stats as much as possible to maximize this synergy.

In-game Mod Recommendations: Offense & Potency. Gameplay is the key here as the devs know far more about a new character when they are released than the rest of us do. That having been said, in the Galactic Legend battles to unlock Rey I am finding Resistance Hero Poe to be a bit too squishy, so modding to ensure he has more survivability may be a better fit for you.

The “ideal mod setup” can be interpreted a few different ways. If you target Speed, Offense and Potency through the mods you should be able to maximize RHP’s kit, but consider a Health or Defense set to help add to his survivability if this becomes a problem for you. Here are my recommendations for the best mods for Resistance Hero Poe: