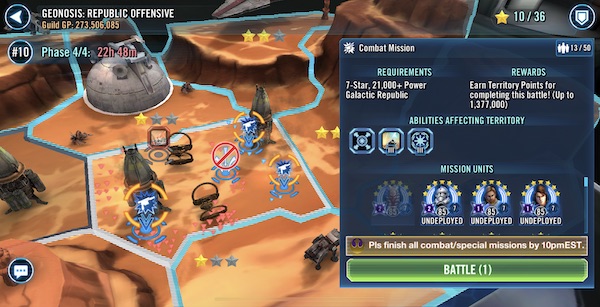 The following is a Walkthrough of my experiences in Phase 2 that will be updated over time. Phase 2 has three Combat Missions in the middle territory, with one of the Combat Missions requiring 7-star, 21,000+ power Galactic Republic characters. Below is what I used on this specific mission.

Note that I am not using Ahsoka Tano in the 5th spot because she will be required for the GAS/Ahsoka Combat Mission which I will attempt for the first time the next go-around for this stupid-hard Territory Battle.

I start off working to remove the B2 from the screen which goes much slower than hoped. Shortly after doing so, the Droideka one-shots my maxed, Relic 7 General Kenobi on a Phase 2 Combat Mission. Another representation of CG’s total and complete lack of any respect for investments players have put into this game. Put the crazy hard stuff in Phases 3 and especially 4, and make this a progression. Right now, even with my 6 million GP account, this hardly feels like a game mode worth my time… After killing the B1 I take the Droideka out as well then mow down the rest of the enemies.

The second wave of enemies include a B2, a Sniper Droid, two BX-series Commando Droids, a MagnaGuard and a Geo Soldier. After landing a couple of hits on the B2 I stun the Sniper Droid with R2 which is a nice help, but the MagnaGuard now has taunt. R2’s AoE kills off the B2, but the enemies are getting their turns in and R2 is down. I take out the Sniper Droid and Padme heals the team, then the Commando Droids and the Geo Soldier is last to die.

The third wave of enemies will be my last today, with just Padme, JKA and C-3PO left to face a B2, a Droideka, a Sniper Droid, a Command Battle Droid and an Elite B2 Rocket Trooper. I am able to kill off the B2 and nobody else, ending this run with 704k Territory Points.