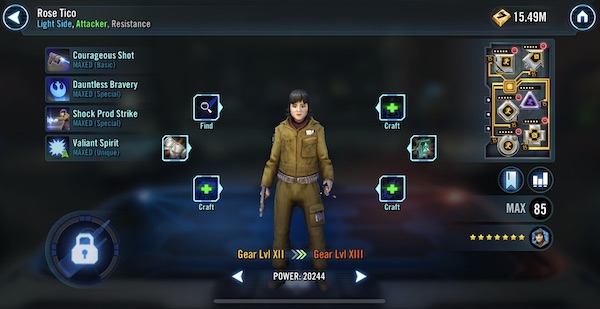 In another edition to the SWGoH Relic Review series, this article will look at Rose Tico and her Relic, the Electro-Shock Prod. As always these reviews compare a character at Relic level 0 to Relic level 7 and mods are not factored in.

To begin with, Rose Tico gains an average Health increase of 17,892. Her 12.55% Armor and 8.97% Resistance increases are both respectable to add to her survivability.

Looking things over, Rose is a low damage attacker with mediocre specials that have high cooldowns. She has very low usability across all game modes and is easily the worst member of the Resistance faction at the time of this writing. While the stat increases from her Relic are good, they aren’t enough to truly raise Rose’s usability. Because of this I rank her Relic in the lower end of the Low Priority tier. However Rose Tico is one of the many required characters for the first Galactic Legend events to unlock the new 2020 version of Rey, and if that is important to you, this Relic moves to the middle area of the High Priority tier.