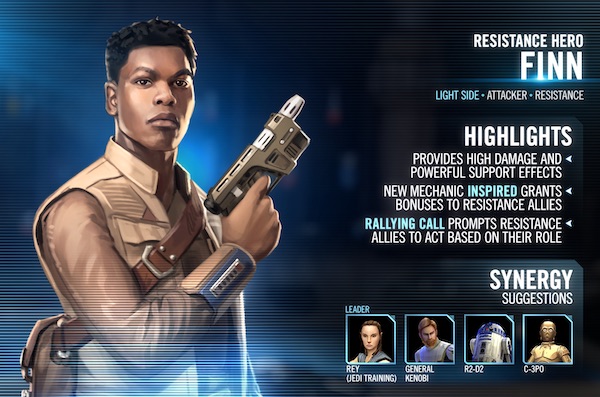 Continuing the Relic Review series, this article will take a look at Resistance Hero Finn and his Relic, the Glie-44 Blaster Pistol. As always these reviews compare a character at Relic level 0 to Relic level 7 and mods are not factored in.

Starting off Resistance Hero Finn gains an average Health increase of 19,422. He also gains a solid 8.71% Resistance boost and a very impressive 14.01% Armor increase to greatly improve his survivability.

On the offensive side RHF gains an extremely high 3,805 Special Damage increase. He also gains a 2,725 increase in Physical Damage, but because he only deals in Special damage this stat gain is wasted. In addition, his Tactics Attacker Mastery sees him gain a 13.5% boost to both Special Accuracy and Special Critical Chance as well as additional damage which is factored in above.

Resistance Hero Finn has a strong kit that synergizes very well with any Resistance team but is expected to work especially well with Galactic Legend Rey as well as Resistance Hero Poe. He gains excellent stat increases from his Relic and he is required to unlock Galactic Legend Rey at Relic level 5. As a result of all of these factors, Finn deserves to be in the medium area of the High Priority tier if not higher.