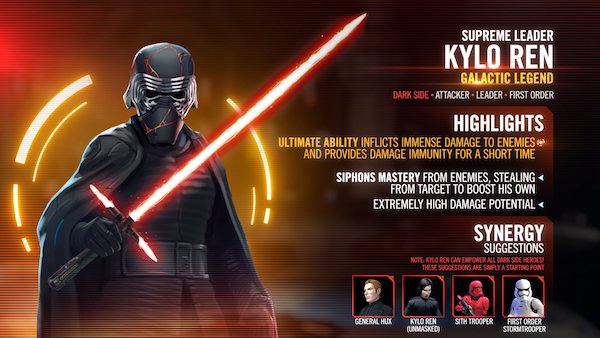 Continuing the Relic Review series, we take a look at Supreme Leader Kylo Ren’s Relic and the impact it has on the game. As always these reviews compare a character at Gear 13, Relic Level 0 with Relic Level 7, and mods are not factored in.

One of the first two Galactic Legend characters introduced in SWGoH, Supreme Leader Kylo Ren is an Attacker and Leader of the First Order faction with stats that are off the charts. In the best mods for Supreme Leader Kylo Ren guide I pointed out that he and Rey are the two fastest characters in SWGoH – more than double the next fastest at base speeds (before mods). All of this is in play with SLK’s Relic upgrades and the stats that are impacted, which we will review in greater detail below. Those stat upgrades include Health, Physical & Special Damage, Armor, Resistance, Physical Critical Chance and finally Special Critical Chance, Critical Damage and Damage from his Mastery.

Defensively, Supreme Leader Kylo Ren gains 17,892 Health, which brings him to just over 93k Health in total – the second highest Health number in the game (behind Rey). His defensive Armor stat gets an increase of just 13.24%, along with a 9.11% gain in Resistance, both of which are above average in comparison to other character Relic upgrades.

On the offensive side, SLK gains a solid 2,884 Physical Damage to bring him to 8,282 in total, the highest Physical Damage stat in SWGoH. He sees a 33.92% increase in Physical Critical Chance to bring his maxed out CC to 115.08%, and he gains a 13.5% Critical Damage boost as well. While SLK does see a Special Damage gain of 3,414 and a gain of 13.5% Special Critical Chance, these stats are just wasted gains that devalue Supreme Leader Kylo Ren’s Relic upgrades, something the developers should not have allowed to impact such a high-dollar character.

As we look at Galactic Legend Kylo and his impact in today’s SWGoH, he is arguably the best character in the game. While Rey, Darth Malak and General Skywalker would also be in that conversation, as well as future Galactic Legend characters after this is published, there is no doubt that SLK is incredibly important to SWGoH and endgame players. As a result of this and his crazy Health, Damage and Speed stats and how they impact his gameplay, any rating below the top of the High Priority category would be bad advice.