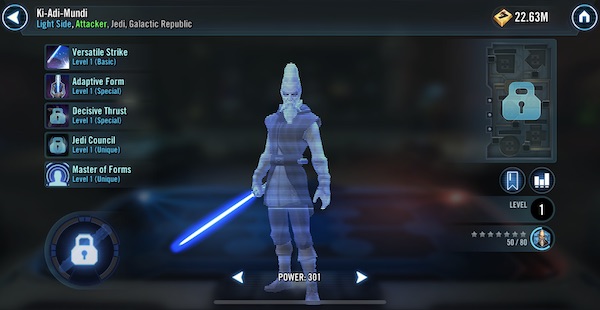 Today’s character to review mods for is the prize of the Light Side Geonosis Territory Battles special mission – Ki-Adi-Mundi. A member of the Jedi Council in Episodes I, II and III, Ki-Adi-Mundi meets his demise at the hands of his Clone Troopers during the execution of Order 66. In Galaxy of Heroes this Galactic Republic Jedi is one of the hardest characters to obtain in the game’s 4+ year history and the testing of this character has been limited. Nevertheless, let’s take a look at KAM’s kit and how mods can best enhance it.

Main Focus: Speed. When mods were first released in Star Wars Galaxy of Heroes, the inclusion of Speed as a stat that can be increased opened Pandora’s Box and has made high Speed stats a necessity across 95%+ of the game’s characters. This is no different with Ki-Adi-Mundi thanks to his ability to switch forms and cleanse and change his stats based on his current form. Add in that he has +20 Speed in his Ataru form and that his unique, Jedi Council, grants all Jedi +30 Speed, and it is clear that this character will need to be fast and will enhance his teammates as a result.

Additional Areas to Focus: Offense, Potency and survivability in the forms of Health and Protection. I mention Offense first despite his lower overall base damage stat because of the fact that Ki-Adi-Mundi has +100% Offense and +30% Defense Penetration when in Ataru form. Add in that he attacks twice when in Ataru form and when using his basic ability and that lower damage stat gets as much as 4x the effectiveness. Potency is a logical focus because KAM can apply the Daze debuff when using the Makashi Jab. Finally, on the survivability side focus on Health and Protection as his unique, Jedi Council, grants all Jedi +40% Max Health. His Protection is just as important to boost given that when he changes to Makashi form he recovers 10% Protection from the change of forms and also when using his basic ability.

In-game Mod Recommendations: Critical Chance & Critical Damage. It is July 21, 2020 and I just finally unlocked KAM and the in-game recommendations are CC and CD. This caused me to look over his kit again and now that I have him, I can start testing. On the surface, CC and CD look like bad, uniformed recommendations by the devs, but I will hold off on being overly critical until I have completed some testing of Ki-Adi-Mundi in battle.

The “ideal mod setup” can be interpreted a few different ways. If you target Speed, Offense, Potency, Protection and Health through the mods you should be able to maximize his kit. Here is my recommendation for the best mods for KAM: