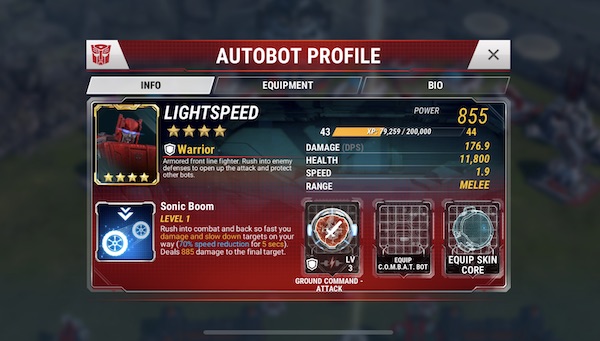 Autobot Lightspeed and his Decepticon equivalent Ironbison were first added to Transformers: Earth Wars through the Pathfinder Crystals in July 2020’s weekend event Expanded Universes. The duo has a special ability called Sonic Boom that reads, “Rush into combat and back so fast you damage and slow down targets on your way (70% speed reduction for 5 secs). Deals damage to the final target.” So which Power Cores are best for Lightspeed & Ironbison and ensure their abilities are properly enhanced?

Ground Command/Force – Trithyllium Plating – Lightspeed & Ironbison are Warrior bots and should be equipped with Power Cores that enhance this role for the teams they fight on. The Sonic Boom special ability is a rush in ability, and while these bots rush back out they are sure to take damage. As a result, enhancing their survivability is essential to get the most out of their skills. The Ground Command/Force – Trithyllium Plating Squad Core does just that by restore the equipped bot’s health and reducing damage from Auto Cannons, Laser Turrets and Shock Towers. Another option would be the Onyx Prime Core which boosts the bot’s attack damage and helps reduce damage when below 40% health, thus making it a solid choice as well.

Should I Buy, Transformers Earth Wars

TFEW: Should I Buy the Cyber Pass?