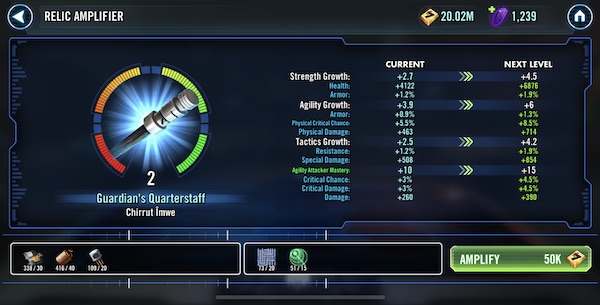 To start off, Chirrut Imwe gains a Health increase of 17,910. While this is a middle-of-the-road gain, at Gear 13 Chirrut has just 24,046 Health, so the nearly 18k gain is and increase of over 74% which is a Top 15 increase in SWGoH. Worth noting is that when paired with Baze Malbus, Chirrut gains 20% of Baze’s Max Health, and given Health is a main stat to increase through mods on Chirrut Imwe to best enhance his abilities, the gains from his Relic upgrade will be quite helpful to his kit. Chirrut also gains a 9.9% Armor increase and a 6.14% Resistance increase, both of which rank in the lower 3rd of all SWGoH characters.

Offensively speaking, Chirrut gains a Physical Damage increase of 2,884 which is tied with many for 1st place across all SWGoH Relic upgrades. Add in a strong 33.92% Physical Critical Chance increase and his CC stat comes in at 84.25% when maxed at Relic 7. He also gains a 13.5% Critical Damage boost as the Relic upgrades certainly point toward Chirrut Imwe as an improved Rebel Fighter and Attacker. While Special Critical Chance gains are also included in his Relic increases, since Chirrut only deals Physical Damage this stat can be ignored.

While the Chaze combo – Chirrut Imwe and Baze Malbus – was part of the META after Rogue One debuted in theaters, this Rebel pair has continued to decline thanks to the game’s power creep and thus been irrelevant for years. With the addition of Mon Mothma to SWGoH and the new Rebel Fighter tag, however, Chirrut and Baze have been given new life. The key is keeping them together – Chirrut gains 20% additional Max Health when alongside Baze and Baze gains Chirrut’s Counter Chance and Health Steal stats. With all of this factored in, if used alongside Baze Malbus and under a Mon Mothma lead I can see Chirrut Imwe’s Relic peaking in the middle to upper area of the Medium Priority tier.