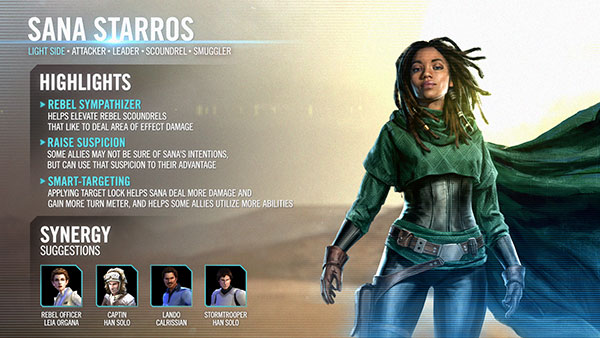 Welcome to the best mods for Sana Starros, the latest article in our series about the popular game Star Wars Galaxy of Heroes where we take a look at the best mods for each SWGoH character. While I do not claim to have all of the answers in this game, I do my research and have used every character I write about extensively. These are mod recommendations and they are certainly not the only option. However we look to help players maximize their characters in SWGoH and we are always open to feedback if you have a mod setup that works well with your gameplay. 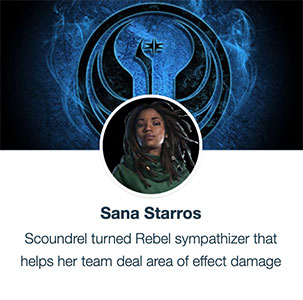 Today’s character to review is Sana Starros, an December 2022 addition to SWGoH leading up to Doctor Aphra. Understanding how to best mod Sana became even more important when I took her to Relic 6 just hours before the new Rise of the Empire Territory Battle began in mid-December. In SWGoH, Sana Starros is a Light Side Attacker who is a Scoundrel and Smuggler that supports specific Rebels in the game. Let’s take a look at what mods to use on Sana Starros to maximize her on your roster.

Main Focus: Speed. With a base Speed of 183 is strong, it does put her below Boushh Leia, Admiral Raddus and most of the Inquisitors. However, Sana has a high Counter Chance which means additional retaliatory attacks will be coming. Either way she can do some real damage and high Speed will be quite important, but a Speed set is not recommended.

Additional Areas to Focus: Potency, Critical Chance, Critical Damage, Offense and survivability in the forms of Health. Potency will help Sana land some important debuffs – Vulnerable from her basic and Tenacity Down and Stagger from her Smart-targeting Scatterblaster special, but remember that when used as a Leader, Sana grants Rebel allies and herself +30% Potency. Critical Chance is possibly the key stat to boost with Sana Starros when used as a Leader as “whenever Rebel allies or Sana critically hit an enemy, they inflict Target Lock for 1 turn, which can’t be evaded.” This Target Lock also reduces Rebel Scoundrel Tanks’ cooldowns by 1 which can significantly impact Stormtrooper Han or Cara Dune. With any character with high CC, you want to increase Critical Damage as well, so a triangle mod with a CD focus is recommended. I personally have an Offense set on Sana to ensure she hits harder, and again, when used as a Leader, Rebel allies and Sana gain +30% Offense. When it comes to survivability, I would stick with Health as Sana has a Protection Up mechanic built into her Leader ability, and Protection Up is based on the character’s Max Health in SWGoH, and when Sana or her Rebel allies deal damage more than once, they gain additional Max Health in-battle.

In-game Mod Suggestions: Offense & Potency. Potency is quite important given the ability to inflict Vulnerable, Tenacity Down and Stagger, all strong debuffs, but I lean more toward Critical Chance as the other mod set (with Offense for sure). Honestly, if your mod inventory is stronger with Potency mods with high speed secondaries you really cannot go wrong here with CC or Potency mods. Note that if you go with a CC set, I would use a Potency-focused plus/cross mod to makeup for that lost Potency from the mod set.

As mentioned above, Speed, Critical Chance Potency and Health are all quite important to Sana’s kit. Here are my thoughts on the best mods for Sana Starros in SWGoH: