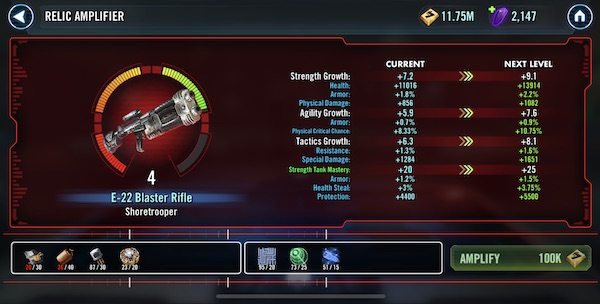 In the latest edition of the Relic Review series, this article will take a look at Shoretrooper and his Relic, the E-22 Blaster Rifle. As always these reviews compare a character from Relic level 0 to Relic level 7 and mods are not factored in.

To start off, Shore gains a slightly above average Health increase of 19,728 and it is further amplified by the 10% Health increase from his unique. Given we recommend Health mods on Shoretrooper to best enhance his abilities, the gains from his Relic upgrade will be quite helpful. His 12.4% Armor increase is very impressive, but the 3.97% Resistance increase is quite disappointing. In addition, he receives an extra 9,900 Protection.

Shoretrooper gains a Physical Damage increase of 1,534 along with a 15.58% Physical Critical Chance increase. Finally, he receives a 6.75% Health Steal bump. While his offensive stat increases are underwhelming, they matter very little because of his role as a defensive tank who taunts.

Shoretrooper is a strong tank who can be used on an Empire team but fits in well with most teams that need an additional taunter. His defensive stat increases complement his role well, and the health increase improves his team-wide heal on his special. Overall, this Relic belongs in the middle area of the Medium Priority tier.

Be the first to comment on "SWGoH Relic Review: Shoretrooper"