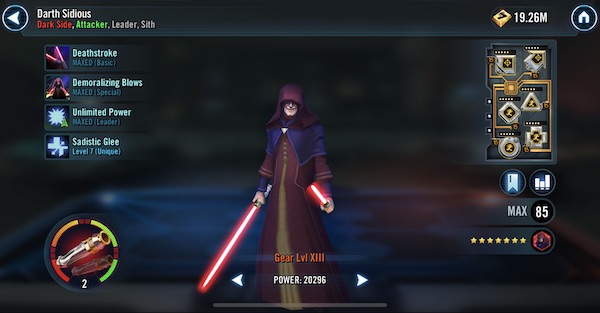 In another addition to the SWGoH Relic Review series, this article will take a look at Darth Sidious and his Relic, a pair of Lightsabers. As always these reviews compare a character at Relic level 0 to Relic level 7 and mods are not factored in.

To start off, Darth Sidious gains a slightly below average Health increase of 17,910. Coupled with his Zeta upgrade to Sadistic Glee, this can really add up at higher Relic levels for Sidious. A relatively squishy character at all levels in the game without the Zeta, he sees strong increases to both Armor and Resistance, 13.14% and 9.06% respectively.

Darth Sidious is an outdated character with potential use under leaders such as Darth Vader or Darth Traya if you are lacking in available Sith. However being a Relic requirement for Sith Eternal Emperor means many players will relic Sidious, improving the chances he finds his place in the game. As of now, excluding his status as a Galactic Legend requirement, he belongs in the upper end of the Low Priority tier.