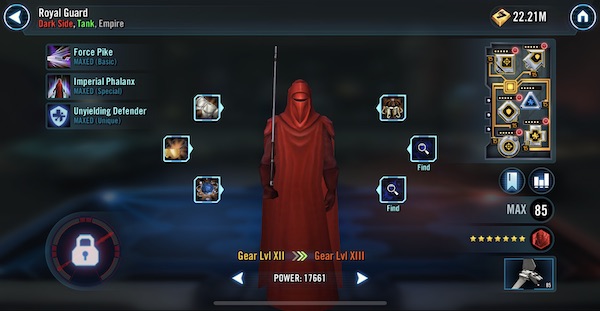 Gaming-fans.com has been a staple in the Star Wars Galaxy of Heroes community since the beginning. From our character Mod Guides and breaking news as a EA GameChanger to our Sith Raid Guide and more, our site seeks to help educate players about this highly complex mobile game. With Relic Amplifiers in the game, Gaming-fans.com has you covered as we seek to continue to make the community smarter when it comes to how to get the most out of Star Wars Galaxy of Heroes.

In another addition to the SWGoH Relic Review series,, this article will take a look at Royal Guard and his relic, the Force Pike. As always these reviews compare a character at relic level 0 to relic level 7 and mods are not factored in.

To start off, Royal Guard gains a strong Health increase of 19,728, one of the survivability stats we encourage players to enhance in the best mods for Royal Guard in SWGoH. While his 11.36% Armor increase is good, the 3.77% Resistance bump is very disappointing. He also gains an additional 9,900 Protection thanks to his role as a tank.

Royal Guard gains 1,534 Physical Damage as well as a 15.58% Physical Critical Chance boost and a 6.75% Health Steal bump. While these numbers are below average, his offensive capabilities are virtually irrelevant as his role is to taunt and tank.

Royal Guard is a severely outdated tank with a poor kit and little viability in SWGoH in 2020. The stat increases from his Relic are overall average at best. He copilots a somewhat viable ship but the main factor in relic-ing him is that he is a requirement for Sith Eternal Emperor. If this is important to you, he belongs in the lower end of the High Priority tier. Otherwise, he is in the upper end of the Low Priority tier.