Welcome to the Best Mods for Royal Guard – the latest article in our series about the popular game Star Wars Galaxy of Heroes where we take a look at the best mods for each SWGoH character. While I do not claim to have all of the answers in this game, I do my research and have used every toon I write about extensively. These are mod recommendations and they are certainly not the only option. However we look to help players maximize their characters in SWGoH and we are always open to feedback if you have a mod setup that works well for your gameplay.

Today I’ll be reviewing mods for the Empire’s Royal Guard, one of the Elite, faceless defenders of Emperor Palpatine. Early on, the Royal Guard was considered an essential character for his ability to disrupt arena battles and take a beating, but as time went on his value continued to decrease. With the announcement of Royal Guard as the November 2019 login character for the month, speculation was abound that RG and Emperor Palpatine could get reworks with The Last Jedi coming out in just a few weeks later, but the Imperial Royal Guard continues to border on worthless in the game as 2020 comes to a close. Let’s take a look at what we feel are the best mods to use on Royal Guard to maximize his effectiveness.

Main Focus: Royal Guard’s unique, Unyeilding Defender, gives him TM every turn an ally is hit, and will trigger his taunt whenever one drops below 50% Health. 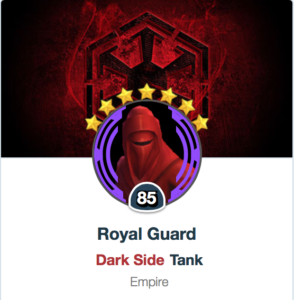 Because he already has a steady trickle of TM, you don’t need a turn to Taunt, and since his Taunt only lasts one turn, Speed isn’t a great stat for him. You want Royal Guard to stay alive, soaking up damage for as long as possible, so survivability stats like Health, Protection and Defense should be your main areas of focus, as seen in the Royal Guard’s Relic Review. Note that Royal Guard gains Health Up from his special ability and recovers Health from his unique, so give that Health stat the attention it deserves.

Additional Areas to Focus: Other than Protection, Health and Defense, Tenacity and Potency are both important. Tenacity will help prevent Buff Immunity and Shock that will prevent your Taunt. After these, Potency is a stat valuable to Royal Guard’s kit as it helps land the Stun and Speed Down debuffs for when you get a chance to use his basic ability, Force Pike.

In-game Mods Recommendations: Defense. The recommendation of Defense in itself is correct, however this feels shortsighted and rather lazy if it is the only stat the devs recommend to focus on with mods. As noted above, Royal Guard gains Health Up from his special ability and recovers Health from his unique, so saying Defense is the only area of focus is is mistake in my opinion. We will see if a November 2019 rework comes and changes things in any way.

Royal Guard has always had a rather straight-forward mod setup for the most part as long as you focus on enhancing survivability stats. Our recommendations for the Royal Guard’s mods would be:

i’ve got a rg with a health mod on the plus node. and i’m unsure to give it a potency or tenacity primary. I am using it primarily arena. The issue I got is how affected would the stun chance be if I replaced my potency mod and put in the tenacity mod?

What are your current Potency and Tenacity levels on RG?

How should I mode rex plse help

Potency will help his basic remove TM, Health if you use him as a Leader, then offense and CC/CD to hit harder. Any other survivability (defense, health or protection) is never bad.

Hey Ijcool110, sorry about the crazy late reply. So i’ve replaced the potency mod with the tenacity mod and I’ve got my RG at 27.55 potency and 57.3% tenacity. so far, it’s been alright and stagnate between rank 80-130 in the arena. I run a tarkin lead, mostly for the speed boost. together with vader, EP and boba.

[…] of the Old Rebublic games and KOTOR Lego sets. For the sake of SWGoH, Sith Trooper is an enhanced Royal Guard and should be modded […]