A lot has changed in 5 years. Call of Duty: Black Ops III and Madden NFL 2016 were atop the charts as the top-selling videos games of 2015 and titles like Fortnight and Among Us were years away. At a studio in Sacramento, California, a new game using the Star Wars IP changed the way Star Wars fans looked at gaming thanks to the work of EA Capital Games. With The Force Awakens released just a month later, Star Wars Galaxy of Heroes looked to capitalize on the love of all things Star Wars and do something few Star Wars video games had ever done before – be a mega-hit. While many games had success over the years, SWGoH was looking to take that success to the next level, and financially, they have done just that. 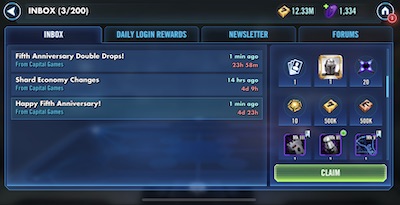 As it was reported about a year ago, Star Wars Galaxy of Heroes has made over a billion dollars, and while EA Capital Games is focused on their next billion dollars from the game we all love, I am really hoping they take this article to heart and create a Mandalorian-themed Raid. But even without a ground-breaking, updated idea like this that my fellow content creators came up with, the constant evolution of SWGoH and fresh content are what the fan base wants. There’s no doubt that communication has been spotty at best over the past two years from Capital Games, notably starting at the time that they disbanded the SWGoH GameChangers program, but let’s give credit where credit is due – it has been much better in the past few months.

This brings us to today as SWGoH celebrates its 5-year Anniversary. With Moff Gideon and a new Rancor Raid Challenge Tier incoming, the content schedule for SWGoH will be a bit different than in years past with no new movies in the immediate pipeline. While there are still a plethora of characters that could be added from all three trilogies, Galaxy of Heroes is finally starting to align with the most popular Star Wars material to come out since 2015 – The Mandalorian. We celebrate 5 years of SWGoH today with a fantastic gift pack – a full Zeta, key purple and gold gear, Relic and mod slicing materials, Gear 12 finisher pieces and some shards. While this gift from EA Capital Games is certainly appreciated, let it not cause us to lose sight in what we all want, CG included, a resurgence of SWGoH in 2021 and beyond as we head toward another major milestone 5 years from today.