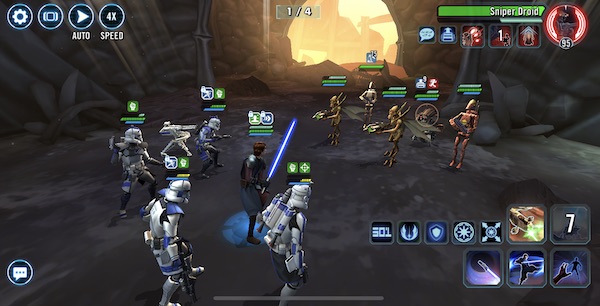 01.16.21 – I start the battle by landing Slow on the Sniper Droid before taking out the B2, and while I take several hits, causing GAS to take a knee, I land a Echo AoE to stun the enemies, the Sniper Droid included. This is exactly why I have him modded with more Potency than in the Phase 3 KAM mission as I need the Stuns to help control the battle. After taking a knee for a second time, the B2 is out of the way and the Sniper Droid is my target, but his turn meter is close to 90%. I am able to take him out with GAS and several Clone attacks, as well as one from the LAAT (Full Strength), to keep GAS standing. GAS takes another knee and they trigger the Fives sacrifice, then Rex Rex-hilates the B1 Droid captain who I forgot to note earlier. Two Geos and a B1 remain as I am able to finish off the B1, then the Geos to move on.

The second wave of enemies features a Droideka and a Sniper Droid as well as a B1, a B2, a Geonosian Soldier and a Geo Spy. Echo is up firsts and lands the Stun, then I start hitting the B2 and take him out fast. Next the Sniper Droid the aces several hits until the Rex-hilate is up and I hit Droideka, but it only removes the protection and maybe 20% of his health. Droidek rolls up, and regains the lost protection, but after I take a few hits I use the LAAT to dispel the Damage Immunity. I then use the AT-TE to get the Sniper Droid down, but the Droideka goes off on GAS and he kneels. I take out the Sniper Droid and finish off the B1 then set my sights on the Droideka once again. The Spy and his Geo buddy team up to kill Echo as I feel this slipping through my fingers. Rex takes a big hit and is barely alive, but he gets another Rex-hilate and finally clears the Droideka as GAS stands up. I focus several hits on the Geo Spy and then kill off the Geo Soldier to move on.

The third wave of enemies includes a BX-Series Commando Droid, a B1, a Geo Soldier, a B2 Rocket Trooper and a T-Series Tactical Droid. Since the Tactical Droid allows B1s to critically hit I am focusing on the B1 first, but after dropping him to 28 stacks I have a Rex-hilate up and knock most of the protection off of the BX droid. The next round of hits target the B1 and kill him off. Now GAS is up with his specials and he targets the BX droid, landing the AoE Daze and then the Armor Shred. I follow with the LAST and then the AT-TE, but they do not do the damage I had hoped for as the Rocket Droid taunts. I work around the taunt and kill the BX droid and then focus in on the Ge0 and take him out then the Rocket Trooper with a Rex-hilate to move on.

The final wave of enemies is the 6 Geonosians, and I start with a AoE from GAS that lands just 3 Daze debuffs, then the counter cause him to kneel. A Rex-hilate of the Geo Brute and the AT-TE and LAAT blasts do little to help my cause as they kill of my remaining Clones as GAS is back on his feet. This spells the end for me as I finish with 1,615,250 Territory Points.