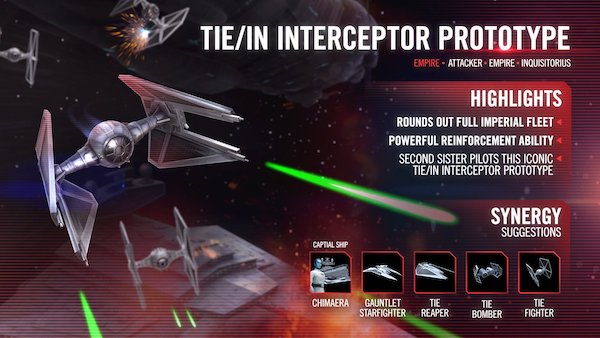 The ships portion of Star Wars Galaxy of Heroes has been in need of some changes basically since the introduction of the Executor to the game, and the Imperials appear to be poised to start bolster their ranks. The newest ship coming to SWGoH is the TIE/IN Interceptor Prototype with Second Sister as the ship’s pilot. This fast ship (second highest ship Speed in the game) is described by the devs as working “well with Empire fleets. TIE Interceptor under Chimaera shouldn’t be one-shotting Executor defenses, but should now have all the tools needed to challenge many of the fleets in the game,” and “TIE Interceptor’s reinforcement ability is powerful and can help turn the tide of a battle.”

Expected to be a Marquee addition to SWGoH, the TIE/IN Interceptor Prototype graphic labels it as working well under the Chimaera and alongside the Gauntlet, TIE Reaper, TIE Interceptor and the standard Imperial TIE Fighter.

02.03 Edit – It has come to my attention that the TIE/IN Interceptor Prototype will be the prize of the upcoming season of Conquest.