Welcome to the best mods article for Old Republic droid HK-47, another in a series about the popular game Star Wars Galaxy of Heroes where we take a look at the best mods for individual SWGoH characters. While I do not claim to have all of the answers in this game, I do my research and have used every toon I write about extensively.  These are mod recommendations and they are certainly not the only option. However we look to help players maximize their characters in SWGoH and we are always open to feedback if you have a mod setup that works well in your own gameplay. 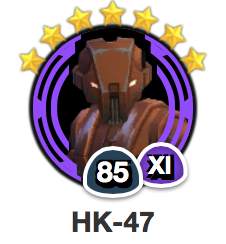 Today’s toon to review mods for will be the HK-47, a strong, durable droid with a very decent leadership ability that used to be very good. One of the first characters I ever reviewed back in February of 2017, HK-47 proved to be a valuable member of the Phase 2 attack teams in the AAT or Heroic AAT for many players when the AAT was still a challenge. While the game has evolved considerably since then, he is still a nice FTP character who continued to work well with Jawas and Droids in SWGoH. But in a game that is over three years old now, HK-47 continues to reinvent himself now as a member of the top META team in the game alongside his master, Darth Revan. Let’s take a look at the best mods for today’s HK-47.

Main Areas of Focus: While nearly every character needs Speed, HK-47, in my opinion, needs a blend of really good Speed, strong Offense and high Critical Chance and Critical Damage. Under the Darth Revan lead he gains 10% CC and 15 Speed for each debuff on him, and, if all allies are Sith Empire allies, he has +50% CD. So make him fast so that he can get to his turn as quickly as possible then make sure that he hits as hard as possible.

Looking at HK-47’s abilities, his basic has +30% CD when used against debuffed enemies and grants him Offense Up, his AoE attack, Havoc, is where you want higher Offense numbers since it cannot critically hit, and again hits debuffed enemies harder. His Assassination Protocol special deals massive damage which is why you want more Offense, CC and CD. In addition, he deals 25% more damage to any enemy that has Deathmark or Fear. However, his newest unique, Loyalty to the Maker, was all about the synergy with Darth Revan as it grants him major stat boosts if DR is his leader.

Additional Items to Consider: I know this mods guide is a bit different than our traditional ones, but HK-47 has a rather unique kit. Note that in Darth Revan mirror matches, DR has 100% Defense Penetration, so adding Defense is not advised. I tend to aim for Health with my Sith Empire team, but both Health and Protection have value given HK-47’s Self-Reconstruction unique sees him recover 5% Health and 5% Protection when a buff expires on an enemy. Finally, Potency will help the droid land Tenacity down on his AoE, but he is a damage dealer and Bastila Shan (Fallen) is your lead debuffing character on the Sith Empire team.

In-game Mod Recommendations: Critical Chance and Critical Damage. While I, too, have this same setup on my HK-47, Offense mods could be in play for this character as well. The key in my opinion is the high Speed and Offense secondary stats and ensuring the maximum CD from the triangle mod.

The preferred setup for HK-47 would be either a set of 4 Critical Damage or Offense mods (based on your mod inventory) and ideally a set of 2 Critical Chance mods with high Speed and Offense secondary stats. Thus, here is what I recommend for HK-47’s mods:

This is really sloppy compared to most others. Are there 2 options for primary?!

“The preferred setup for HK-47 would be a set of 4 Critical Damage Mods and a set of 2 Critical Chance mods.”

Also why is there no gammoren when he’s one of the originals?

Are you asking why no mod guide for the Gamorrean Guard? If so it is because 1) real people research and write these so time is hard to come by and 2) Gamorrean Guard is largely irrelevant in SWGoH and has been since being released. He is not an original toon though.

My suggestion is survivability and potency for GG.

But he is an original to the game so 2 years old. Irrelevant by your standards perhaps. Seems irrelevant to get upset when you offer a service and advertise you have it for each character and someone calls you out on the fact you really don’t. I didn’t make you do something you don’t have time for. I’ll just change out the link in my guild for mod help since you don’t really have the “the best mods for EACH character” only the ones you feel are relevant.

Wow man, you really took that the wrong way. We research each and every character – who else does that? This is a service to the fans of the game and sure, we make a couple of pennies each month, but there’s no need to get all angry about it. I answered your question and provided you with the focuses on the character giving you the honest reasons. There was no attitude in writing it but it seems you have unfortunately taken it that way.

I think this is the first time I’ve commented on a gaming-fans.com post.

To be perfectly honest, I think I check your site at least 3 times a week. I recommend it as a valuable resource to anyone that asks about SWGOH. There is some much content written by writers who care about the game.

[…] 2 of the Heroic AAT because of his leadership and synergy with other droids. Of course having the best mods on HK-47 is key to maximizing his abilities, so be sure to look to Gaming-fans.com for our Best Mods guides […]