Welcome to the Best Mods for Death Trooper in SWGoH, another article in our series about Star Wars Galaxy of Heroes where we take a look at the best mods for individual SWGoH characters. While I do not claim to have all of the answers in this game, I do my research and have used every character I write about extensively. These are mod recommendations based on the character’s kit and actual gameplay to help you in your quest to dominate the Galaxy of Heroes holotables. 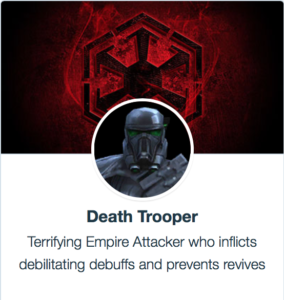 Today I’ll be reveiwing mods for Death Trooper, farmable in Star Wars Galaxy of Heroes on Cantina node 8-A. Originally labeled to be only valuable with Director Krennic, Death Trooper has evolved in the game since his introduction and proven his value in the game on specific Imperial Trooper teams under a General Veers lead. Now, with the introduction of the new Imperial Remnant tag, Death Trooper joins Moff Gideon, Stromtrooper and the Dark Trooper as we expect more to be added in the future. For now, let’s take a look at how we can enhance the Dark Trooper’s abilities with mods in SWGoH.

Main Focus: Potency is the main focus I recommend for Death Trooper as his basic has the ability to both Daze and Stun given the right parameters and proper Potency levels, including when Moff Gideon is in the leader slot. His special, Death Trooper Grenade, also benefits from Potency as it inflicts a healing immunity to previously buffed enemies. With all of this in mind, shooting for 75%+ Potency is almost a must for Death Trooper.

Additional Areas to Focus: Speed, Offense, Critical Chance and Critical Damage. Death Trooper’s special, Terminate, is a guaranteed critical hit when the enemy is suffering from any debuffs so added CD will make this attack more powerful. His unique, Krennic’s Guard, reads “whenever Death Trooper scores a Critical Hit, he and Director Krennic recover 15% health” (20% when a Zeta is added). Thus, a higher CC for Death Trooper is only logical since he, and potentially Krennic, would benefit from additional critical hits. Of course very few use Krennic for anything in SWGoH, so this is really wasted on Death Trooper in 99% of all gameplay. Added Offense to ensure he hits hard enough is really important as well, especially when used in GAC and Territory War counters. Speed is important for almost every character in SWGoH, so boost his Speed to earn more attacks as while he does not need a big Speed stat, working on turn order for your Imperial Trooper or Imperial Remnant team can be the difference in a battle.

Speed Priority: 4/10 – While you do not want Death Trooper to be below 200 Speed slow if you use him a lot or value him highly, he is not one to need high-end Speed secondaries either. Focus more on Offense and Potency to ensure he does his job well and concentrate your higher Speed stats on Moff Gideon, Colonel Starck, Admiral Piett or other Imperials you use DT with.

In-game Mod Recommendations: Critical Damage & Critical Chance. While I cannot fully agree with this recommendation, I cannot fully disagree either. Death Trooper is not a big-hitting character despite being an Attacker in SWGoH, but you do need to add significant offensive firepower to him via mods to make him most effective. My Death Trooper is tuned to be part of a GAC and Territory Wars counter and I am using and Offense and Health set with a major emphasis on Potency from the secondary stats.

Since Death Trooper needs a specific mix of mods, I am choosing to go with one set of 4 Critical Damage or Offense mods and one set of 2 Potency or Health mods to gain as much as possible in these areas. Thus, here are my recommended mod options for Death Trooper:

Straight up, once I get one, I’m switching to a CC triangle. I’ve been running a CD one and it doesn’t feel worth it when you could be healing DT and Krennic more with higher crit chance. The damage on Terminate only really matters IMO on the first time using it, and then after that you’re getting Deathmark applied which pretty much means lights out for any hero. Plus now with Talzin and Plague being a thing, I think the healing will be a higher priority.

Thanks for the feedback and comment – I will test this out myself and see how I feel as well. Good luck!

Love death!!! Run him with thrawn lead, shore, stormtrooper and veers…. yes I know I most only use him as a leader but using him mainly for his AoE and with thrawn command…. using it over and over on Death is crushing…!!!!!!!!