Welcome to another article in a series about Star Wars Galaxy of Heroes where we take a look at the best SWGoH character mods for each specific toon. While I do not claim to have all of the answers in this game, I do my research and have used every toon I write about extensively. 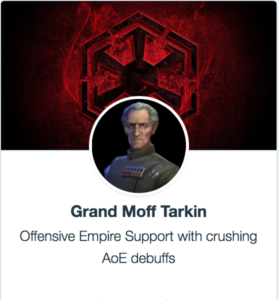 Grand Moff Tarkin is described by SWGoH as an “offensive Empire support with crushing AoE debuffs.” While his AoE debuffs were not originally “crushing,” Tarkin became even more effective, especially against Rebel squads, after a mid-2017 rework. One of my personal favorite Star Wars characters, I have used Grand Moff Tarkin numerous times in the Galactic War, and after his rework I have used him in the Arena extensively under a Zeta Darth Vader lead alongside Grand Admiral Thrawn and others.

Main Focus: Potency is the main focus for Tarkin, with Speed as an obvious need to be mentioned below. Both of Tarkin’s special attacks need Potency to be effective, however if you run Tarkin under a Emperor Palpatine lead, remember that you get a 32% Potency boost. Ultimate Firepower is an AoE attack which, thanks to the rework, has significantly more power than before. However, its effectiveness comes from a 100% chance to remove 50% turn meter from each enemy it strikes, and the attack gains offense equal to double Tarkin’s Potency percentage. Intimidation Tactics grants Tarkin Potency up and can apply Offense and Critical Chance down for 3 turns, and Rebel enemies and Rebel enemies cannot resist the debuffs. With an Omega, Tarkin also gains 15% turn meter for each debuffed enemy. In a nutshell, get your Potency up to ensure these attacks are maximized.

Additional Areas to Focus: Speed and survivability. My early complaints about Grand Moff Tarkin in SWGoH were that he was slow and that he was too squishy; aka too easy to kill. The rework helped a lot as his Callous Conviction unique has Tarkin gain Defense equal to his Potency percentage, however Mods should be used to help on the secondary stats. But while keeping him alive is important, you want him attacking often, especially against Rebel enemies, so Speed is critical as well. He starts off as one of the slower characters in the game and does not gain significant Speed through Gear level 10, so getting his Speed up is going to be a very important part of making sure Tarkin maximizes his effectiveness for your squad.

For the purpose of the Daring Droid R2-D2 event, because Tarkin’s special Intimidation Tactics can apply Offense and Speed Down on Rebel enemies, he seems like a good fit on paper to take on the Rebel scum we have to fight. Many have him starred up from the Squad Arena and Ships, so Tarkin seems a likely choice to be that 5th Empire character.

The mod strategy for Grand Moff Tarkin could go a couple of different ways. I could see where 6 Potency mods or 4 Speed and 2 Potency mods is suggested (although with his low base speed, I would not recommend speed mods on Tarkin). But not everyone has a library of available specialty mods sitting around unused, thus the use of Health/Defense and Potency mods may be more practical. Here is my preferred mod setup for Grand Moff Tarkin, given the emphasis on Potency since the update:

SWGoH: To Zeta or Not to Zeta Reworked Tarkin Review & Full Zeta Footage -

[…] SWGoH video, To Zeta or Not to Zeta Reworked Tarkin Review and be sure to check out our updated Best Mods for Grand Moff Tarkin […]

Is this mod set based on grand moff tarkin’s reworked character? Would love to know as I am currently using him in my line up. Thank you.

This has been updated since the rework – I hope it helps!

With Tarkin’s rework, would you change his mods in any way? I was originally thinking 6 potency, but maybe 4 speed 2 potency with the recommended primaries and secondaries would be better. Thoughts?

I would add more focus on Potency since it helps his defense and it increases the offense on his AOE. Speed and Potency above all else.

Hi, great reviews, use them extensively. I just unlocked ep 7 star and was going to zeta ep but my mods have me holding at 100 +/-. (No chance of competing in top 50)

I was thinking gmt L, zDv, ep, zIpd,zHan.
Thank you.