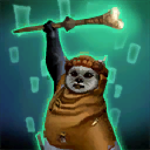 Today’s character to review mods for is July 2017’s SWGoH Login Character of the Month – Chief Chirpa. In addition to being the month’s login character, Chief Chirpa also got a bit of a boost in his stats and a new Zeta ability in the July 2017 Ewok Faction Pass upgrades. As if you still care, lol. Chief Chirpa and the Ewok faction has had a rollercoaster ride in Galaxy of Heroes, rising and falling with game updates and new ability materials. This is no different in December of 2021 at the time of this article’s revision, as Chief Chirpa was recent given an Omicron ability upgrade. Let’s take a look at how to best mod this Ewok leader to maximize the faction’s effectiveness.

Main Focus: I wrote this in 2017: “Speed. I know, this Speed, Speed, Speed trend is annoying, but it is the reality of Star Wars Galaxy of Heroes.” Turns out it was not a trend, but rather a necessity that will never go away in SWGoH. With Speed you can make your Ewoks annoying and possibly steal a win, or at least some banners in the Grand Arena, and without it you’re going to get steamrolled or be forced to leave them on the bench. Chief Chirpa has a rather poor base speed of 138, but given the Turn Meter gains that come from Ewok basic abilities under Chief Chirpa’s lead, getting all Ewoks rolling as soon as possible is key. Add in his Tribal Unity Speed boost and you can really see that Ewok synergy at work! But the new element is his Omicron ability which reads: “While in Grand Arenas: Ewok allies have +30 Speed. Ewok allies deal an additional 40% more damage with Basic abilities and have an additional 40% chance to call an Ewok ally to assist when using a Special ability.” This places even more emphasis on getting the Turn Meter train rolling, similar to the Imperial Troopers of the past few years, so that once you get going it is hard to stop.

Additional Areas to Focus: Health, Tenacity and additional survivability. Health is important for Chief Chirpa because his Ancestral Secrets special grants all allies 20% recovery of their Max Health. With this and Ewok Elder’s revives both having a percent of Health parameter, all Ewoks should have some focus on Health. Outside of Health and Speed, additional survivability and Tenacity are both important to keep Chief Chirpa alive and annoying the heck out of your enemies. Note that Critical Chance can be of benefit if you have a Zeta on Logray‘s unique which helps heal allies on Ewok teammate crits, but I would not allow Speed or survivability stats to suffer from 1-2% more CC on a mod secondary stat.

In-game Mod Recommendations: Critical Damage & Critical Chance. My reaction to this in July 2017 – “Wait, what? I had to go back and look a second time to make sure that I did not mis-read the suggested mod sets in the game on this one.” My reaction in December 2021 is no different. When Mods 2.0 went into effect for SWGoH the devs went through and tried to recommend the best mod sets for each character. I appreciate the effort, but there are a LOT of big misses across the SWGoH roster. Worse yet, 3+ years later they still sit in-game with these embarrassing misses.

Let’s get down to why CC & CD are not a good fit. To start, Chief Chirpa has 38.33% Physical CC at Gear 13, and 59.42% CC at Relic 9 with no CD increase from increased Relic levels. High end critical hit based characters gain extra CD from Relic upgrades in SWGoH and Chirpa is not one of them. In addition, his Physical Crit stat, according to SWGoH.gg, is well below the 50th percentile of all Galaxy of Heroes characters – below big hitters like Jyn Erso, Ewok Elder and Kanan Jarrus (sarcasm intended). Finally, Health has to be a recommended mod set on this character given the importance of Health to Ewoks as a whole – not including it is downright sad as this is where the word “embarrassing” is warranted. Speed is a tough set to recommend given his low base Speed, I admit, but getting these Ewoks to annoy and win is the key, so that is why I say Speed and Health. Comments below are welcome as the goal here is to give the best advice possible.

SWGoH: Going Nerdy asks “Is this the New Arena Meta?”

[…] it made him a bit more viable, but you want to get his Speed number as high as possible even though Chief Chirpa, Ewok Elder and Teebo all have the same […]

[…] critical hits, thus shoot for the 216% total CD stat to maximize his power and kit. Remember, Chief Chirpa‘s Ancestral Secrets special grants all allies 20% recovery of their Max Health, so it would […]

[…] to Focus: Health, Potency and additional survivability. Health is important for all Ewoks because Chief Chirpa‘s Ancestral Secrets special grants all allies 20% recovery of their Max Health, plus […]