Despite having great offensive stats and a powerful move set, Darth Maul was considered under powered for a long time. Originally too slow and too “squishy” to survive long enough to make a difference, Darth Maul benefited greatly from different additions to SW:GOH. The advent of protection provided a much needed boost to his survivability. Mods made it possible to boost his speed. The Guild Store, and later the Fleet Store made his shards accessible to FTP players. However, it wasn’t until he was given a zeta upgrade that Darth Maul really became a great character. 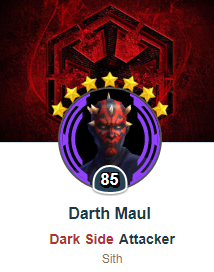 The description of Darth Maul’s zeta’d leader ability, Dancing Shadows, is; “All Sith allies gain 20% Evasion, gain 20% Turn Meter and Stealth for 1 turn at the start of each encounter and whenever they Evade or are Critically Hit, can’t be Critically Hit while Stealthed, and gain Advantage for 2 turns whenever Stealth expires. The Stealth and Turn Meter from this ability ignores Taunting allies.”

Prior to spending zeta materials on Darth Maul, the description reads; “All Sith allies gain 20% Evasion and gain 20% Turn Meter whenever they Evade or are Critically Hit.” Big difference. Stealth when they evade or are critically hit. Critical hit immunity while stealthed. Advantage when they come out of stealth. And, most importantly, Sith allies start each battle stealthed, immune to crits, with 20% extra evasion, AND 20% turn meter!

Darth Maul went from being considered nonviable to a shard topper overnight. The previous meta, based primarily around out speeding your opponent, started dropping like a stone, and the rest is history.

Gameplay: In all honesty, the overwhelming feeling I got playing with zMaul teams was frustration. As the arena became over saturated by Darth Maul led teams, battles quickly devolved into RNG fests, with the outcome largely depending on who got luckier with dodges. Putting this aside however, Darth Maul teams are great against other teams, and there’s something immensely satisfying about seeing one of your characters dodge a full team attack courtesy of General Kenobi.

Squad Arena: While the meta is definitely shifting, Darth Maul led teams can still perform well in the arena, even at high levels – zMaul is still the second most common leader at rank 1. The downside however, is Rex led teams range from difficult to impossible to defeat, making your daily climb a difficult one, especially since zMaul teams tend to drop dramatically. So while top ranks are possible, expect a challenge.

Rancor: Darth Maul isn’t suited to the Pit raid. Devour can’t be evaded, stealth will be dispelled, and the turn meter boost on the first turn doesn’t do much.  You’re much better off taking Maul out of the leader position and using zVader.

AAT/HAAT: Zeta Darth Maul led teams are quite effective in phase one of the Tank Takedown raid. The evasion bonus helps keep them alive, the frequency of stealth buffs helps spread the damage around, making it relatively easy to make it to enrage. Having a cleanser (my preference is Savage Opress with a zeta) makes it even easier, giving you ample time to do damage.

Territory Battles: Teams led by Darth Maul are well suited to attrition battles like Territory Wars. The evasion can be especially helpful, since it gives you a good chance of dodging powerful enemy abilities. However, without a reliable way to recover health, RNG will still play a big part in the outcome of each battle.

Territory Wars: Although hard counters to Darth Maul led teams exist, they require characters that are commonly used in (or against) meta teams. This gives you more opportunities to force an opponent to burn their essential characters, reducing the pool of teams they can use against current meta teams. Additionally, the evasion, stealth, and limited critical hit immunity all increase the survivability of your team, making zMaul a solid defensive leader in Territory Wars.

How I Use Darth Maul: The survivability provided by the extra evasion, stealth stopping the opposing team from effectively focusing fire, and the individual ways different Sith can recover health all make zMaul teams ideal for attrition battle like Guild War. I also use Darth Maul in phase 1 HAAT. I do not however, run a Maul team in arena anymore – I found I was dropping too low to recover without refreshing with crystals.

My Rating of Darth Maul: I rate Darth Maul a solid 9/10. His usefulness across most aspects of the game makes his zeta ability a wise investment if you need a few different roles filled. Sith being relatively quick to farm helps bring the rating up as well, since it makes building a team easy.

[…] used to be one of the top-used toons in the Arena before the Zeta Maul meta, and thanks to the introduction of R2-D2 in May 2017, Wedge has gotten a bit of a boost in […]