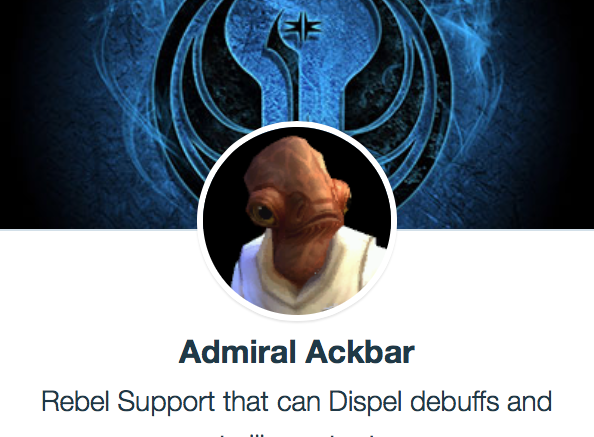 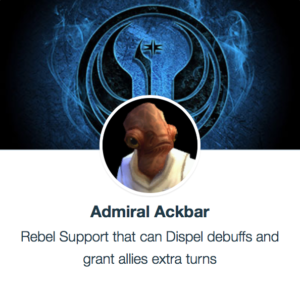 Today’s toon to review mods for is Rebel leader Admiral Ackbar. Popular for his time in Return of the Jedi and for the phrase “It’s a Trap!”, Ackbar is a Mon Calamari who nearly became the University of Mississippi’s (Ole Miss Rebels) mascot in 2010.

In SWGoH, Admiral Ackbar is an easy character to farm in the early stages of the game and viable throughout. His Capital Ship, Home One, adds significant value to the character given it is the most-used of the three Capital Ships we have in the game at this time. One notable bit of info on Ackbar is that Rebel Coordination, his leader ability, maxes out at Level 7. Since Zeta Abilities are always Level 8 abilities, this leaves room with Ackbar for a future Zeta Ability.

Main Focus: Almost every character needs Speed, and Admiral Ackbar is no different. He is especially valuable against teams that land a lot of debuffs and when used as a leader against characters who counter attack, so get him as fast as possible to take advantage of his Tactical Genius and It’s A Trap special abilities as quickly and often as possible.

Additional Areas to Focus: While Speed is the main focus, I recommend you do NOT use a set of four Speed mods. Therefore, Health and survivability would be the other areas to focus, while some may prefer Offense or CC/CD. As we know, offense directly impacts Critical Chance and Critical Damage stats, so if you want your Ackbar to hit harder it would make sense to beef this area up. I prefer Health and Defense mods on Ackbar since they are the easiest to farm and if his Max Health is higher then the It’s A Trap special is slightly more effective since it grants 9% Health recovery for each debuff dispelled. Outside of this additional survivability in the form of Defense and Protection are also recommended, especially now that Defense mods have a greater value after the Mods 2.0 implementation.

In-game Mod Recommendations: Speed & Health. While I do not strongly recommend against using Speed mods on Ackbar, I ask that you strongly consider it. His base Speed is just 131 maxed out and given Speed mods boost the character’s Speed by 10%, you will only see an increase of 13 from the set of four mods. I would ask that you consider Health and Defense mods as a result, but ensure you have high Speed secondaries.

Admiral Ackbar was more of a must-have early in the game, but as the game gets more advanced he is more of a niche character on specific teams. That having been said he is a must-have for his Capital Ship and is a solid toon. One note – because of his Capital Ship be sure to try and use 5-dot and 6-dot mods only to enhance Home One’s abilities.

Here is my recommended Mod setup for Admiral Ackbar:

[…] for credit heist events) tag, makes him an excellent choice for new and old players alike. As with Admiral Ackbar, Lando has a leader ability, Fast and Loose, and a unique, High Roller, which is maxed at level […]

Wouldn’t a mix and match with speed and health be better? 4 and 2 is what I have and my Ackbar is my main rebel leader ahead of wedge. My Ackbar squad gets me to the last 3 battles in GWAR every time.

I am not a fan of Speed mods on characters who have average or low base speed. Akbar’s base is 119 – thus a 15% boost from the maxed speed mods adds just 18 speed. However, these are just our recommendations based on the stats.

is the mods setup more or less the same with the current (early 2018) raid meta using ackbar, cls, thrawn, bb8 and r2?

Thanks for the question Todd – looking this over there is nothing that I would change as his kit remains the same. In the Hermit Yoda setup I would think even more emphasis Speed and survivability.

I would even say speed and survivability are essential. We’re in a meta where massive damage and debuffs are part of almost every team, so being able to survive a double (or triple) tap from Raid Han, or a chain of assists from an RJT team is a must, as is being able to cleanse as often as possible.