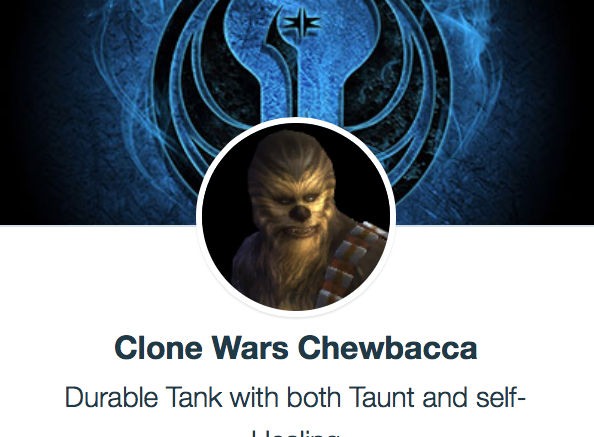 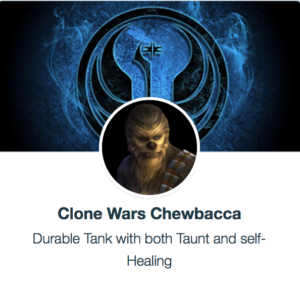 Today’s character to review mods for will be Clone Wars Chewbacca. The first taunting tank in the game for most players, in this case Chewbacca is in his Clone Wars form, not his Rebel Chewie form as he is best known. As a result, there is no synergy with Han Solo (whom he does not know yet), and while he is a good early gameplay character in SWGoH, he has a diminished value later in the game.

Main Focus: While every character needs speed, Clone Wars Chewbacca is one of the slowest in the game with a base speed of 106. Thus, you can put a lot of effort into speeding him up and still not be that great. My recommendation is to go with survivability – defense, health and protection – as the primary focus. Beef each of these numbers up so that Chewie is a hard kill in your squad.

Additional Areas to Focus: Potency is certainly important, and a little Tenacity boost is never a bad idea. Tenacity will help keep the negative status effect, called debuffs in SWGoH, away while Potency will help his basic, Bowcaster, remove Turn Meter more often. Any little boosts of Speed are nice to have as well since this version of Chewie is so slow in the game, but enhancing survivability stats need to be your main goal when modding Clone Wars Chewbacca.

In-game Mod Recommendations: Defense. No disagreement here as you want to focus on survivability, but I would be sure to have at least one Health set on him as well.

The “ideal mod setup” can be interpreted a few different ways. If you target speed, potency, tenacity and survivability through the mods this could work out well a number of different ways. Here is my recommended mod approach: