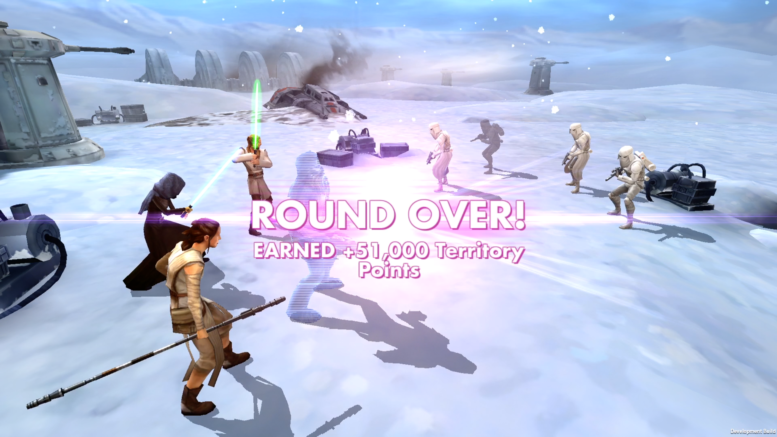 One things we know about Territory Battles – Hoth Invasion – it will require higher level of communication among guild members if you want to go for better rewards. This new Star Wars Galaxy of Heroes’ feature can be tricky, especialy when deciding how to use your units. Here are some strategy tips to make things easier for you and your Guild. 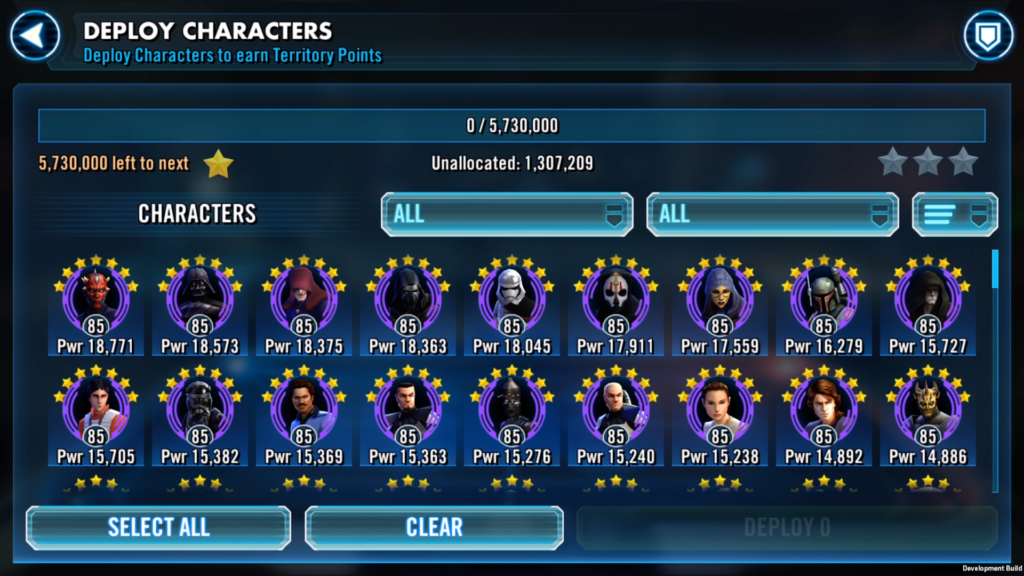 First, you should evaluate your Guild’s total Galactic Power (GP) and have an idea about the strength of individual members. GP is basic metrics in territory battles, read How to Calculate Power, Points & Earn Stars.

You should also count key units. Hoth Invasion, first installment of the Territory Battles event, requires a lot of Light Side units and Rebels with a few specific characters. Our Guide to Characters & Ships You Will Need will help you better understand what is needed.

One key to note in Territory Battles is that you need to earn one star in each territory to progress. The good thing is you can always expect some rewards but the more stars on territories you earn, the better the rewards are, including shards for new characters and Gear XII. Here is A Look at the Reward Structure for Territory Battles – Hoth.

There are six phases of territory battles, each being 24 hours long and progressively increasing requirements for units from 2* to 7*. Every phase includes four types of missions – special, combat, platoon and deployment. You need to spread out your units among these missions. Check out our Walkthrough All Phases & Missions here.

Once you consider your Guild’s power and set a goal, the time for strategic planning has come. You can’t use the same characters repeatedly in one phase of Territory Battles. Once you use it in any mission or platoon squad, it is gone.

Phases 1 and 2 are designed for players to get in touch with the new feature, set for 2-star a 3-star units. I suspect the developers from Capital Games made these two phases easy on purpose so everyone gets some rewards. Real fun begins in Phase 3 with Ships and first of three special missions.

When thinking about units to use, it should go this way:
1) Special missions
2a) Combat missions
2b) Platoon missions
3) Deployment

This should be your top priority once you reach Phase 3. These missions always require specific units so everyone should prepare them as soon as possible, and rewards here are based on numbers of guild members who successfuly complete special mission.

In Phase 3 you fight for unique shards of new character Rebel Officer Leia Organa (ROLO), unobtainable anywhere else. Participation here should be mandatory; as many members finish successfuly as many shards you will receive. 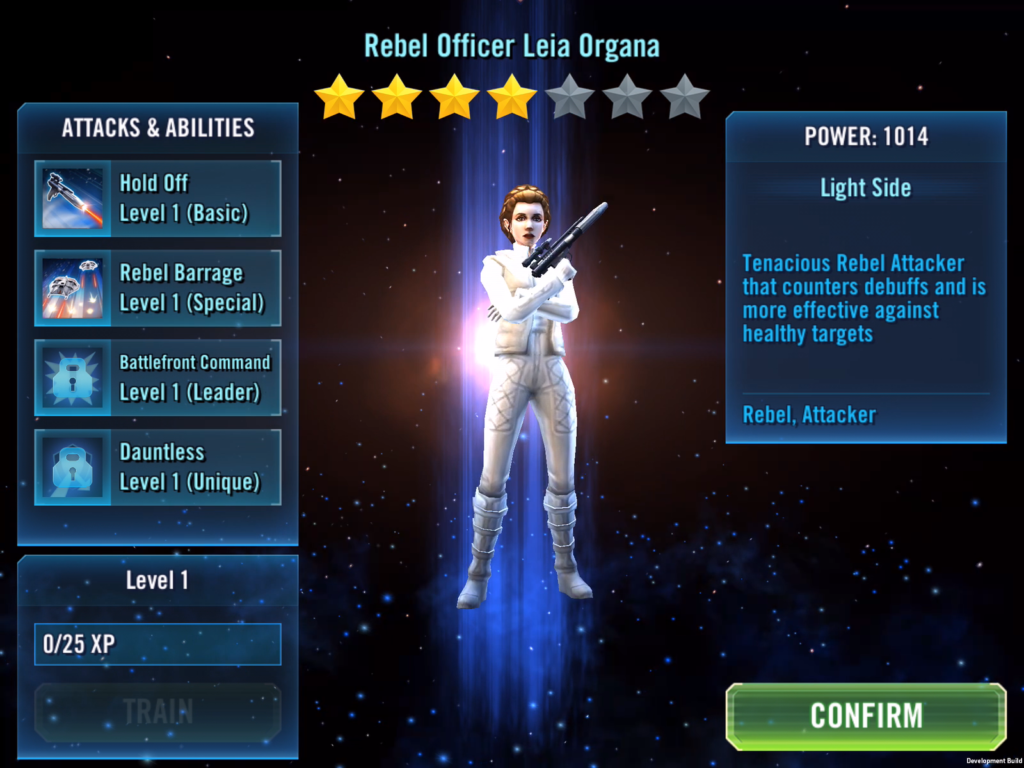 ROLO is later required for special mission in final phase 6 so you should work toward getting her, and there are more required units. Hoth Rebel Soldier (5* for phase 3) has been in SWGoH since the beginning. Captain Han Solo (5* for phase 3, 7* for phase 7) should be obtainable in 7-D Cantina Battle. And you will also need Commander Luke Skywalker (7* for phase 6).

Phases 5 and 6 offer another two special missions where you get Guild Event Tokens, currency connected with new shop which will offer other unique shards of newbie Hermit Yoda and other interesting stuff. Success here brings 10 Guild Event Tokens per member.

Several 7* Rebels and 7* Light Side teams are crucial as you will use them across all phases. One 7* Rebels only team is a must as there are missions only for them. Equip your ships up to 7* too. You also need the second brother from snowy planet – Hoth Rebel Scout – pushed to 6* stars. If you reach phase 5, you will use your 6* Phoenix team. And finally phase 6 requires a 7* Rogue One team.

All published info indicates that you receive most of your points in earning territory stars right here in combat where you battle with six waves of enemies which are progresively harder and each completed wave gives you more points.

It seems you will probably use some fixed teams phase by phase. But look before you leap – here comes Platoon missions and the most tricky part of Territory Battle feature.

Platoons are dumping missions, separated into six squadrons with a need for specific units. It is in the best interest of the whole guild to complete all platoons, as they are essential in all territories to get buffs and debuffs, strengthening your units and/or weakening enemies. 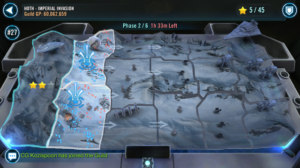 Why is it so tricky? Units dumped to platoons cannot be used in any combat of current phase. And some platoons require rare units, which can be crucial for territory battle teams. For example, we already know there is a need of Baze Malbus somewhere – as revealed by Warrior’s YouTube in-depth video – so you could lose your Chaze combo in that phase.

Here comes strong guild coordination to assemble who can fight in this phase without units required in platoons and can put them there. One guild member can dump a maximum of 10 units in specific territory.

Deployment missions are the easist part of Territory Battles where you dump your unused units (for Hoth Invasion mostly Dark Side) to increase your Territory Points. Units used in other types of missions will automatically deploy to the specific territory where they fought.

Deployments are on most territories and you should also think twice here. Once all special, combat and platoon missions are done, check a map which territory you are close to earn star on. Then dump necessary amount of your unused units.

Also, early in-depth videos warned not to listen to tutorials of Territory Battle – Hoth Invasion as it suggests to do deployment first. It is the last step of your fighting in a specific phase.