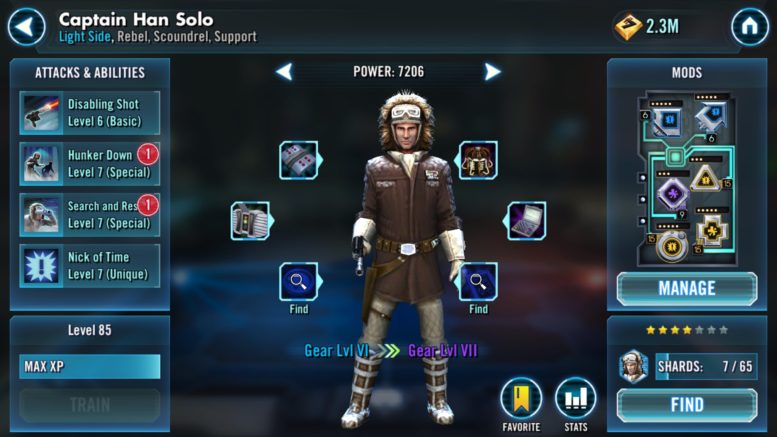 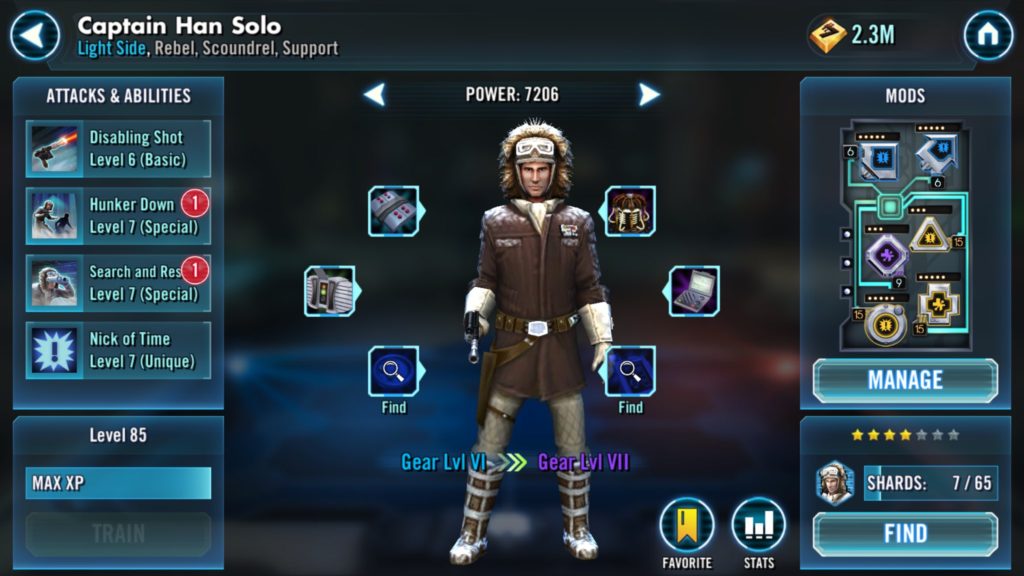 Today’s toon to review mods for is one of the newest characters in the game and one of the most well-known heroes of the Star Wars saga – Han Solo, only this time as Captain Han Solo. Available on Cantina node 7-D starting in late August 2017, CHS was a requirement in some missions within Territory Battles – Hoth for several months, but his value rose alongside Rebels in Territory Wars and later Rebels and Scoundrels in the Grand Arena. Let’s take a look at the best mods for Captain Han Solo below.

Main Focus: Speed. What has become increasingly annoying in SWGoH is the extreme need for Speed for anyone looking to compete at the highest levels in this game. Look to get Captain Han Solo to the 170-180 range to even be competitive against tough enemies.

Additional Areas to Focus: Critical Chance, Critical Damage, Health and Potency. Potency will help his basic, Disabling Shot, when used on non-Empire enemies (Empire enemies cannot resist or evade). His unique, Nick of Time, gives CHOLO +15% Critical Chance and +30% Critical Damage on top of his regular stats, so look to turn these good numbers into great numbers. Finally, his Hunker Down special not only dispels debuffs from Captain Han and a target ally, but both recover Health equal to 40% of Captain Han’s Max Health. In addition, if you put a Zeta ability material on his Nick of Time unique CHOLO gains 10% Max Health (stacking) for 3 turns, so getting his Max Health number higher is nothing but a plus. Note that CHOLO’s Relic stat boosts impact his Health, Dodge & Deflection chance, CC and CD.

Territory Wars April 2019 Bonus: Looking back, this was so long ago… But in April 2019 there were two Territory Wars events with all five Han Solo characters in-game receiving “bonus abilities” in Star Wars Galaxy of Heroes. For CHOLO, he had “+50% Max Health, and other Han allies can’t be defeated while Captain Han is active.” Thus, the mod strategy was modified temporarily. That having been said, there’s no need to worry about that now.

In-game Mod Recommendations: Speed & Health. No disagreement here, but consider Critical Damage strongly depending on how you use Captain Han given his +15% Critical Chance and +30% Critical Damage from Nick of Time.

I recommend the use of four Critical Damage and two Health mods on Han with as much Speed as possible, but you could go with a Speed set of 4 instead of the CD set. Here is my recommended approach for mods on Captain Han Solo, aka Hoth Han:

[…] from beating a Special Mission in Phase 3 of Territory Battles – Hoth, you must first have Captain Han Solo unlocked and at 5-stars to even earn shards of ROLO. I was able to test her out extensively in my […]