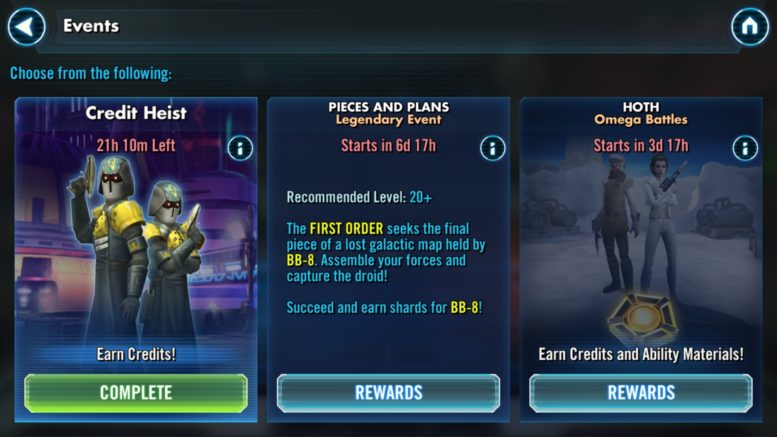 The newest Legendary event has been announces for Star Wars Galaxy of Heroes players, and the character to unlock is none other than BB-8. “It’s a BB unit with a selenium drive and thermal hyperscan vindicator, internal self-correcting gyroscopic propulsion system, optics corrected to—,” okay, you get the point. 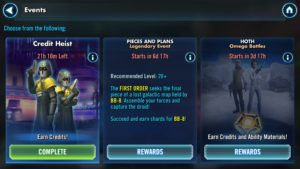 BB-8 will join us in a Legendary event called Pieces & Plans and is set to start on Thursday, September 28th according to the SWGoH Calendar of Events.

What is needed to unlock BB-8 in SWGoH?

If you want to unlock BB-8 in the Pieces & Plans Legendary event, you will need your First Order team powered up. For long-time players this is not as daunting a task, but for newer players getting a team of 7-star First Order characters will be very costly. First Order Stormtrooper and First Order TIE Pilot, in particular, are very hard, long farms.

How strong do I need to have my First Order characters?

It is not yet clear on how strong your First Order team needs to be to unlock BB-8. It is safe to assume that this will be much more like the Artist of War event to unlock Grand Admiral Thrawn than the Emperor’s Demise event for Emperor Palpatine. The Thrawn even is very difficult as seen in our Live Blog where it was obvious that having the characters alone was not enough without the right gear and mods. I expect more of the same in the BB-8 event.

The one concern for me in the Pieces & Plans Legendary event is the necessity of Zeta Abilities. As we have detailed in the Zeta Ability reviews here on Gaming-fans.com, the First Order Zetas for Captain Phasma, FOST and FOTP are not top-tier and, unless combined, are rather average in comparison to others. Thus, I am saving a Zeta in case it is needed to unlock BB-8 but I certainly do not have any First Order member near the top of my list of the Best Zeta Abilities (except Kylo Ren of course).