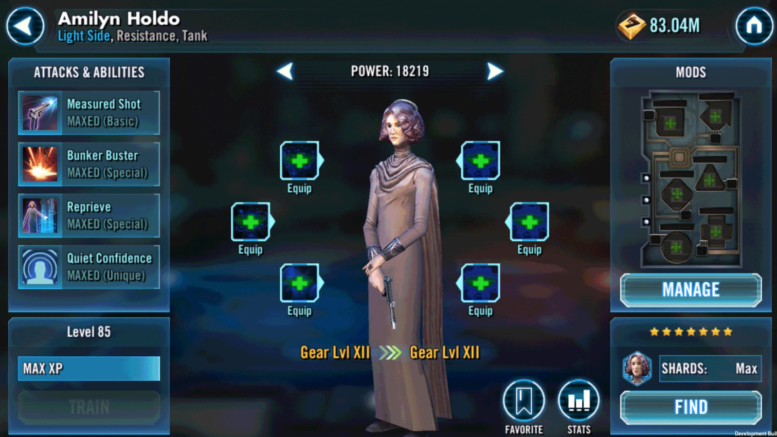 Welcome to the best mods for Amilyn Holdo, another article in our series about Star Wars Galaxy of Heroes where we take a look at the best mods for individual characters. While I do not claim to have all of the answers in this game, I my research and I have used every toon I write about extensively. These are mod recommendations based on the character’s kit and actual gameplay to help you in your quest to dominate the Galaxy of Heroes holotables. 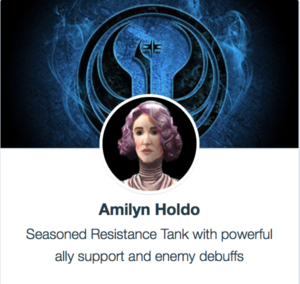 Today’s character review is Vice Admiral Amilyn Holdo. Thanks to EA & CG’s old SWGoH GameChangers program I was able to test Holdo out extensively when first released. Described in-game as a “seasoned Resistance Tank with powerful ally support and enemy debuffs,” Holdo has an interesting kit that complements her Resistance allies rather well. However her value in-game was quite low until February 2020 when it was announced that Holdo would pilot a Capital Ship – the Raddus, and that she was a required character in the first Galactic Legends event. Let’s take a look at our recommendations for the best mods for Amilyn Holdo.

Main Focus: Speed, like with all characters in SWGoH, is a must with Holdo to allow for her turn to come faster so that you can utilize the attacks. When Holdo does not have Taunt she has a +50 Speed (when maxed), but that is no reason not to make her as fast as possible, assuming you do not drastically ignore the secondary focuses below.

Additional Areas to Focus: Potency and survivability. Potency will help her special attack, the AOE called Bunker Buster, which can inflict the Daze debuff on all enemies, as well as Evasion and Defense down on the primary target. Survivability in the forms of Heath, Protection and Defense is key to maximizing Vice Admiral Amilyn Holdo’s kit. Health is a great start because she can Taunt, and her Quiet Confidence unique ability sees her recover 10% Health when she gains Taunt. She is a Tank, which by definition, is designed to take a lot of hits, and with the impact of Relics enhancing the Mastery stat and bringing characters back to their original intent, this is more important than ever. Amilyn Holdo’s Relic upgrade, specifically, sees her survivability stats increased significantly.

In-game Mod Recommendations: Health. Health is certainly very important to her kit and enhances her high base stats nicely, but a set of Defense mods with high Health, Speed and Potency secondaries could also be in play.

Because Holdo’s stats have her high in health and very slow, I feel it is important to strengthen a weakness and enhance a strength. Let’s take a look at my preferred approach for Amilyn Holdo’s mods:

[…] as a “brave Resistance Attacker who can Stun and grant allies buffs,” Rose, like Vice Admiral Holdo, has an interesting kit that complements her Resistance allies rather well. Let’s take a look […]