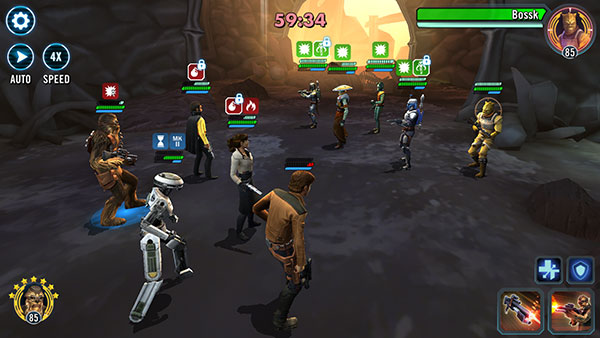 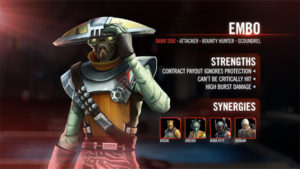 Today’s character to review mods for will be the Bounty Hunter Embo. One of the newest Bounty Hunters in SWGoH at the time of this writing after being added to SWGoH in August 2018, Embo has a very strong kit that includes the ability to dispel buffs on his basic. Let’s take a look at the best mods to enhance Embo’s abilities.

Main Focus: Speed. Speed if just a necessary evil in SWGoH and there is no getting around it. Embo’s base Speed is 160 which is solid, so build on the Speed stat through secondaries, but I do not suggest a Speed set.

Additional Areas to Focus: Critical Chance, Critical Damage, Offense & survivability. Embo has a very strong CC stat of 55% at Gear 13 and scales to 100% at Relic 9, so a Critical Chance set plus any secondary CC additions will make even a Crit Avoidance arrow suffer in most cases. Add in that he gains 30% CC when he has no Protection and you can expect a lot of crits from Embo. Finally, Embo’s Payout grants him a bonus turn after scoring a Critical Hit, so load up that CC as much as you can. With CC come Critical Damage, and a CD-focused triangle is a must. Additional Offense is never a bad thing, and given that he has +30% Offense when he has Protection, it seems wise to continue to build on that strength. Finally, added survivability is suggested in the forms of Health and Protection, Health if he is in the leader spot, but Protection is more valuable overall. Added Protection impacts the power of his Kyuzo War Helmet special’s power and he recovers Protection from the granted ability Elusive Strikes which is added when he reaches his payout. Add in Embo’s new Omicron (added in February 2022) which reads: “While in Territory Wars: Bounty Hunter allies gain +40% Max Protection. At the end of Embo’s turn, Bounty Hunter allies recover Protection equal to 25% of Embo’s Max Protection, doubled for Embo. While Embo has Protection, all Bounty Hunter allies gain +30% Defense and 5% Turn Meter when a Bounty Hunter ally receives damage while debuffed.” As a result you are going to want Embo with a focus on Protection with his circle mod and possibly his plus mod as well.

In-game Mod Suggestions: Critical Damage & Critical Chance. The case could be made for Offense over CD, but neither is a bad choice.

The “ideal mod setup” can be interpreted a few different ways, but Critical Chance and Critical Damage mods are my preferred route and the suggested route in-game. Thus, here are my recommendations for mods on Embo in SWGoH: